Items related to The Guinness Book of British Hit Albums 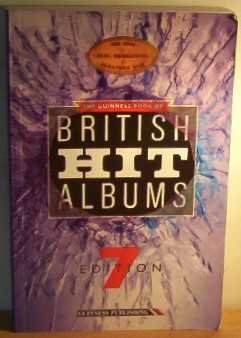 From the authors of the best-selling "Guinness Book of British Hit Singles" comes the completely revised and updated 4th edition of British hit albums, covering every LP which has entered the charts from 1958-1989. With an alphabetical list of every act that has had an album in the Top 100, part 1 details the all-important name, label, peak position and length of time in the charts of each LP, as well as including a special section on compilation albums. Part II is a fascinating look into the statistical facts and feats including a complete record of all the No. 1 LPs, who has had the most chart success, whose is the best-selling album of all time, which LP has spent the longest time in the charts and which artists have entered at No.1. Part II also gives an overview of the album/music scene of the past 30 years and highlights major landmarks, people and titles that were important in the development of the 12 inch disc. The 4th edition of the "Guinness Book of British Hit Albums" with its many black and white photographs, is not only the definitive reference book for those in the music business, but an invaluable source of information for all rock and pop fans.

2. THE GUINNESS BOOK OF BRITISH HIT