Items related to The Encyclopedia of Mammals 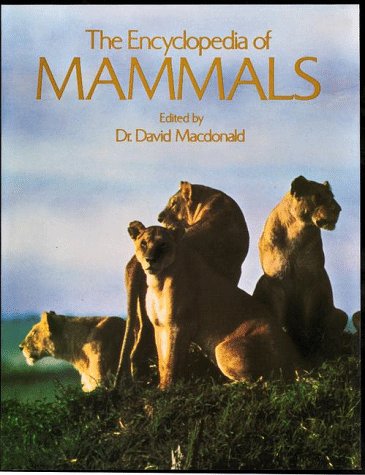 David W. Macdonald is Founder and Director of Oxford University's Wildlife Conservation Research Unit. He was elected a Fellow of the Royal Society of Edinburgh in 2008. He is also well-known as a film-maker and author: his film Night of the Fox was a BAFTA finalist for Best Documentary Film of 1976. His celebrated documentary Meerkats United was voted the best wildlife film of all time by BBC viewers.

Distinguished by outstanding color photographs, this authoritative encyclopedia provides an overview of more than 5,000 species. Written at a level accessible to undergraduates as well as the general reader by an outstanding team of subject experts, the work has broad appeal. The signed articles range in length from one to several pages. There are four types of entries. For each order or group of orders, a general essay highlights the biology, ecology, behavior, and evolution of the group. Accounts of individual species, groups of species, or families of species comprise the majority of the entries and cover details such as physical characteristics, distribution, evolutionary history, diet, feeding behavior, social dynamics, classification, and relationships with humans. Also included are special-feature essays highlighting particularly interesting research and photo-essays showcasing evocative wildlife photography. Appendixes offer a species list, a 5-page bibliography, a 12-page glossary, and a comprehensive subject index.

A one-volume version of The Encyclopedia of Mammals was published in 1984 and expanded to three volumes in 2001. Of some concern is the lack of updated information in the 2006 edition. Many of the articles are essentially unchanged from the 2001 edition . Some of the illustrations date to the 1984 edition. The major changes are the taxonomic arrangement of the articles, an updated bibliography, and several new essays covering recent developments in mammalian conservation. In addition, current information is provided on ongoing threats to endangered species.

This work is recommended for public and academic libraries; however, because of the many similarities between the 2001 and 2006 editions, the 2006 edition is probably not worth the money for most libraries already owning the previous one. Grzimek's Animal Life Encyclopedia: Volumes 12-16; Mammals (Gale, 2004) is another excellent choice, notable for authoritative writing, comprehensive coverage, and ample color illustrations and photographs. Nancy Cannon
Copyright © American Library Association. All rights reserved