Items related to Flock of Dreamers: An Anthology of Dream Inspired Comics

Flock of Dreamers: An Anthology of Dream Inspired Comics 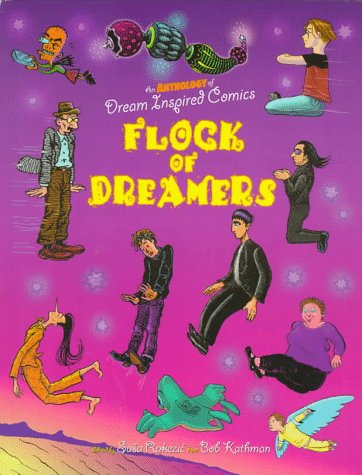 In this unique illustrated book, 23 artists & writers from 8 countries -- including Robert Crumb, Jim Woodring, Rick Veitch & Pat Moriarty -- have drawn their dreams, giving guided tours of their subconscious realms. Some of the authors are recognized dream comic explorers, while for some this is the first time that they have ever tried to create comics based on their dream experience. They are all joined together in an attempt to exploit the possibilities of dream-rooted cartooning. This is a collection of magical nighttime tales you'll never forget.

Dreams have always been a fertile resource for creative artists, including comics artists. For this anthology, 22 cartoonists were invited to contribute short comic strips derived from their dreams. The 22 are rather a motley bunch--obscure artists from the small press scene and from overseas appear alongside old hands, who offer the most convincing work, such as Robert Crumb's depiction of an airborne ride atop the "Helicopter Girl." A few sleepers are here: coeditor Kathman's account of four recurring childhood dreams and Ashley Holt's entries from a "Dream Notebook." Yet few entries convey the effect of the most disturbing dreams. Many consist of single images; although some of these are vivid, they lack the impact of the longer, multipanel pieces that offer the narrative pull of effective comics--and memorable dreams. All in all, an intriguing if rather lightweight offering. Gordon Flagg

Flock of Dreamers: An Anthology of Dream Inspired Comics

Book Description Soft cover. Condition: New. No Jacket. Very unusual and desirable title in new condition. An anthology of dream inspired comics some of the best in the industry have lent work to this special collectible. Seller Inventory # ABE-16278811953