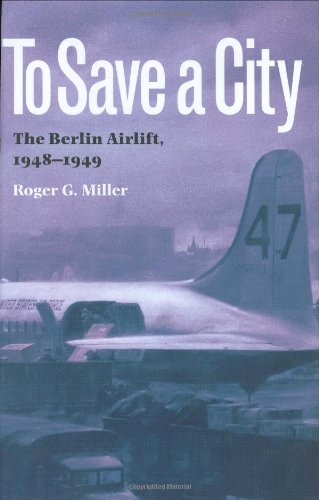 Following World War II, the Soviet Union drew an Iron Curtain across Europe, crowning its efforts with a blockade of West Berlin in a desperate effort to prevent the creation of an independent, democratic West Germany. The United States and Great Britain, aided by France, responded with a daring air logistical operation that in fifteen months delivered almost three million tons of coal, food, and other necessities to the people of Berlin. Now, drawing on rare U.S. Air Force files, recently declassified documents from the National Archives, records released since the collapse of the Soviet Union, and the memories of airlift veterans themselves, Roger G. Miller provides an original study of the Berlin Airlift.

The Berlin Airlift was an enterprise of epic proportions that demonstrated the power of air logistics as a political instrument. What began as a hastily organized operation by a small number of warweary cargo airplanes evolved into an intricate bridge of aircraft that flowed in and out of Berlin through narrow air corridors. Hour after hour, day after day, week after week, a stream of airplanes delivered everything from food and medicine to coal and candy in defiance of breakdowns, inclement weather, and Soviet hostility. And beyond the airlift itself, a complex system of transportation, maintenance, and supply stretching around the world sustained operations.

Historians, veterans, and general readers will welcome this history of the first Western victory of the Cold War. Maps, diagrams, and more than forty photographs illustrate the mechanical inner workings and the human faces that made that triumph possible.

ROGER G. MILLER is a historian with the U.S. Air Force History and Museums Program, Bolling AFB, Washington, D.C. He has published numerous articles on air power and military history.

“The Berlin Airlift was one of the monumental achievements of American ingenuity, morality, and courage of the last century. It has never been fully celebrated. But because we dared it with the help of our allies, the Cold War was won. Roger Miller’s account of this great undertaking will make us damn proud.”--Leon Uris, author, Battle Cry (Leon Uris, author, Battle Cry)