Items related to The Compleated Autobiography by Benjamin Franklin (Completed... 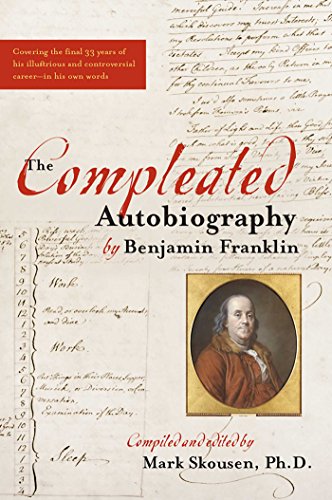 Readers and historians have long lamented that Franklin failed to complete his Autobiography. While a classic in literature and among the most widely read autobiographies in the world, he stopped writing it in 1757-years before the most exciting events of his life. Now, in honor of the 300th anniversary of Franklin's birth, Skousen has finished the autobiography completely in Franklin's own words.

Franklin—in Franklin’s Own Words Benjamin Franklin’s celebrated Autobiography, published after his death, is one of the greatest autobiographies of all time... but it was incomplete. Franklin ended his life’s story in 1757, when he was only fifty-one. He planned to write more—a lot more, but never did. He lived another thirty-three full, eventful, and dramatic years, some of the most dramatic years in American history, years in which Franklin was America’s advocate in London, represented Pennsylvania in the Continental Congress, and was America’s wartime ambassador to France. During these years Franklin also helped write our nation’s Constitution and planned an American Empire that would displace the British Empire. Franklin is one of the most fascinating of the Founding Fathers—a polymath like Jefferson, a practical statesman like Washington, and a cynic and wit beyond parallel. Now, at last, in The Compleated Autobiography by Benjamin Franklin, we finally get the rest of the story, in Franklin’s own words. Faithfully compiled and edited from Franklin’s papers by Dr. Mark Skousen— Franklin’s descendant, acting as his devoted secretary—this is the closest we will ever get to Franklin sitting down in his study in Philadelphia, dipping quill into ink, and finishing his autobiography. In The Compleated Autobiography by Benjamin Franklin, you’ll learn: * Why the United States could not have won the war without Franklin’s diplomatic heroics

* What Franklin really thought of his fellow patriots, like Adams, Jefferson, and Washington

* Franklin’s dramatic one-word change in the Declaration of Independence * Franklin’s radical views on the Constitution, and how his compromise cleared a critical roadblock at the Convention

* Franklin’s candid views on sex and adultery while in France

* His personal philosophy as a radical democrat, and sometimes a social conservative

* How the American Revolution caused Franklin to shift from a free-thinking heretic to a pragmatic believer Soon to be a classic of American history, the Compleated Autobiography by Benjamin Franklin is beautifully illustrated and designed—and a must-read, as we celebrate the 300th anniversary of Franklin’s birth. On each page, the reader will discover what it truly means to be an American, what a precious heritage has been bequeathed to us, and how great the United States has been from the beginning, all seen through the eyes of the most colorful of the Founding Fathers.

Benjamin Fraklin, considered the grandfather of America, is Mark Skousen’s eighth-generation grandfather, through Franklin’s grandson Louis Bache. He has had a lifelong interest in the "grandfather" of our nation. Dr. Skousen’s career has sometimes followed that of his illustrious ancestor, as a publisher, author, financial advisor, teacher, father, public servant, and world traveler. He is also the author of The Wit and Wisdom of Benjamin Franklin.

1. The Compleated Autobiography by Benjamin Franklin

8. THE COMPLEATED AUTOBIOGRAPHY BY

9. THE COMPLEATED AUTOBIOGRAPHY BY