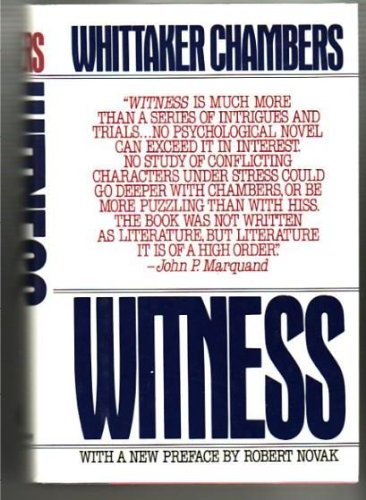 Whittaker Chambers has written one of the really significant American autobiographies...penetrating and terrible insights into America in the early twentieth century. --Arthur Schlesinger, Jr.

First published in 1952, Witness was at once a literary effort, a philosophical treatise, and a bestseller. Whittaker Chambers had just participated in America's trial of the century in which Chambers claimed that Alger Hiss, a full-standing member of the political establishment, was a spy for the Soviet Union. This poetic autobiography recounts the famous case, but also reveals much more. Chambers' worldview--e.g. &quote;man without mysticism is a monster&quote;--went on to help make political conservatism a national force.

WHITTAKER CHAMBERS (1901-1961) was an American writer, editor, Communist party member and spy for the Soviet Union who defected and became an outspoken opponent of communism. He is best known for his testimony about the perjury and espionage of Alger Hiss.

Book Description Condition: Good. A+ Customer service! Satisfaction Guaranteed! Book is in Used-Good condition. Pages and cover are clean and intact. Used items may not include supplementary materials such as CDs or access codes. May show signs of minor shelf wear and contain limited notes and highlighting. Seller Inventory # 0895265710-2-4

Book Description Hardcover. Condition: Good. No Jacket. Item is in good condition. Some moderate creases and wear. This item may not come with CDs or additional parts including access codes for textbooks. This may not have a dust jacket. Might be an ex-library copy and contain writing/highlighting. Photos are stock pictures and not of the actual item. Seller Inventory # DS-0895265710-3