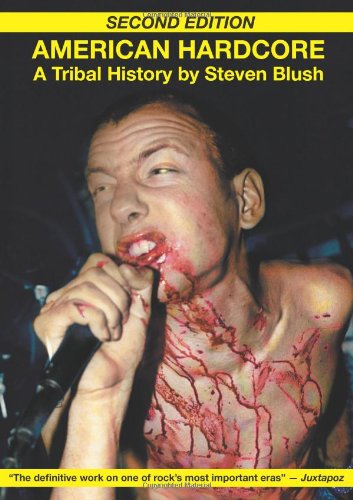 Hardcore punk was an underground tribal movement created with anger and passion but ultimately destroyed by infighting and dissonance. This oral history includes photographs, discographies, and a complete national perspective on the genre.

Steven Blush promoted Hardcore shows in Washington, DC throughout the early 80s. In 1986 he founded Seconds Magazine, publishing it until 2000. His writing appeared in Spin, Interview, Village Voice, Details and High Times. He currently lives in Manhattan, serves as senior editor at Paper, and throws the weekly party Röck Cändy. He is the author of AMERICAN HARDCORE: A Tribal History.

Culling quotes from numerous interviews conducted over a five-year period, Blush presents an oral history of the first generation of American hardcore music (1980-86) what he deems its golden age. Charting the rise of bands such as Black Flag and the Misfits, as well as more famous hardcore alumni like the Beastie Boys and Moby, the book is divided into chapters based on different regional scenes. Rather than having a chronological narrative, then, the book bounces back and forth in time, from chapter to chapter, which will possibly confuse readers unfamiliar with the people and bands discussed. The author's tone also veers between that of a jaded ex-hardcore kid and a sentimental old-timer, but his account is nonetheless fascinating and rings with experience (he promoted hardcore shows and tours in the 1980s). It should also be noted that American Hardcore is the first book to document hardcore on a national level; books such as Cynthia Connolly's Banned in D.C. (1988) and Bri Hurley's Making a Scene (o.p.) have regional focuses. Blush also includes an extensive discography (just on vinyl and cassette, however) that lists noteworthy as well as forgettable releases. Recommended for academic libraries and ones with extensive music collections. Vincent Au, New York
Copyright 2001 Reed Business Information, Inc.