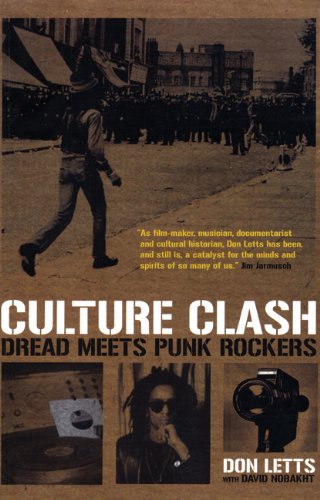 “Vivid autobiography from the Grammy Award–winning filmmaker, friend of The Clash and Bob Marley, DJ and co-founder of Big Audio Dynamite.”—Observer Music Monthly

“Whether relating tales of fainting at Black Panther meetings, being stopped under SUS laws, going to Jamaica, hanging out with Bob Marley and Afrika Bambaataa, forming a band with Mick Jones and most recently capturing Gil Scott Heron, Paul Weller and George Clinton on celluloid, he emerges as an intelligent, arresting, thoroughly likeable narrator.”—Mojo

“[Don] Letts is extraordinarily honest in every sense. Throughout, his sense of assurance and confidence in his place within the world—outsider and insider by equal measure—is inspiring.”—The Wire

“The best lesson that the filmmaker Don Letts’ autobiography can teach modern Britain is a simple one. Never limit yourself. Letts did not allow himself to be fully defined by his colour, nationality or even his Rastafarianism. That helped him play a part in the unification of the punk and reggae scenes. In doing so, he helped race relations in this country to no end.”—The Independent

“Letts’ opinionated and witty narrative is full of the kind of anecdotes (filming and hanging out with the Clash, Sex Pistols, Bob Marley and more) that some people would trade a limb for.”—Q Recommends

David Nobakht was born in London in 1965. He grew up listening to the sounds of Suicide, The Clash and the Sex Pistols. In 1997 he graduated from Camberwell College of Art with a BA (hons) in Graphic Design. He works as a freelance graphic designer and writes reviews for regional press. Suicide: No Compromise was published by SAF (2005)

Buy Used
Condition: Fair
The book is 100% readable but visibly... Learn more about this copy

Book Description Condition: Acceptable. The book is 100% readable but visibly worn, and damaged. This may include stains. tears, rips, folded pages, binding damage, dents, scuffs, scratches and sticker residue. The book also may contain heavy highlighting and notes. Thank you for supporting Goodwill Industries of Ventura and Santa Barbara County in our mission to enhance the dignity and quality of life of individuals and families through education, skills training, and the power of employment. Seller Inventory # 4JQKXZ000QMB

Book Description Paperback. Condition: Very Good. The book has been read, but is in excellent condition. Pages are intact and not marred by notes or highlighting. The spine remains undamaged. Seller Inventory # GOR002010265

Book Description Saf Publishing Ltd, 2008. Condition: Good. This is an ex-library book and may have the usual library/used-book markings inside.This book has soft covers. In good all round condition. Please note the Image in this listing is a stock photo and may not match the covers of the actual item,350grams, ISBN:9780946719990. Seller Inventory # 8700805

Shipping: US$ 11.23
From United Kingdom to U.S.A.
Destination, rates & speeds