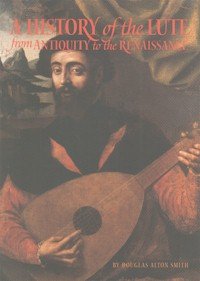 The lute was the most important and versatile instrument in Europe throughout the Middle Ages and Renaissance before yielding its place to keyboard instruments in the 17th century. Ergo, this first comprehensive, English-language history dedicated solely to the lute is long overdue. Musicologist Smith, editor of the Journal of the Lute Society of America, has succeeded at an enormous undertaking: in addition to detailing the history of the instrument, he includes a discussion of its cultural setting, facts about changes in its construction and repertory, and biographies of its most prominent performers. The reader is given a clear overview of the instrument from its origin in central Asia, through its introduction to Europe by Arab invaders, to its prominence as the "king of Renaissance instruments"U in courtly circles. About 75 illustrations (mostly black and white, with a four-page color section) and 56 musical examples round out the text. Highly recommended for medieval and Renaissance history and music collections in public and academic libraries. From Library Journal, 2002. Review by Timothy J. McGee, Professor of Music, University of Toronto.

Although covering the lute's history only up to the end of the Renaissance period, the book's scope is vast. Ample discussion of lute music repertoire, biographies of important composers, the lute's cultural and societal context, tablature notations are all included in chapters organized by geography throughout Europe. As the amount of extant documentary archives and surviving instruments vastly increases after the beginning of the sixteenth century, Smith's book offers an especially detailed and informative account of lute making during this period. It makes a fascinating reading of the multi-generational family lute firms in Bologna, Venice, and Padua from the early to mid-sixteenth century until well into the next century. The staggering output of these workshops hums to life especially in the extraordinary appendices of the book which include two separate room by room inventories made in 1581 of the Tieffenbrucker workshop in Venice describing the astonishing quantity of lutes which filled the building to near over capacity. --From Journal of the American Musical Instrument Society, reviewed by Kenneth Bé (Associate Conservator of Paintings, Cleveland Museum of Art)

In his brilliant and beautiful new book, A History of the Lute from Antiquity to the Renaissance, Douglas Alton Smith has given us a wonderfully-written account of the rich history of that once seemingly extinct instrument. Although the lute is most immediately related to the Arabic oud, Mr. Smith takes pains to trace the origin of the lute to much earlier times. The lute's connection to ancient Greek culture, with its influential philosophy, music theory, and aesthetics, shaped the development of the Renaissance lute as much as its more recent Arabic heritage. Tracing the origin of any string instrument into antiquity is a tricky business. There are many ways in which an author's narrative can become bogged down in slogging through all the loose ends and fragmented bits. What is so refreshing about Mr. Smith's book is the strength of its vision. His writing about the lute's far-distant past is fluid and engaging. . . . He clearly traces the rise of the lute's popularity, country by country.... Mr. Smith has woven many historical threads together to give us a complex and complete picture of the lute as it existed in society. To follow the early history of the lute is to also follow the early history of music. . . . It is a remarkable accomplishment in its scope and depth and literary style. For professional musicians, luthiers, and musicologists, this book is an absolute must. It will no doubt become the standard reference work on the subject for many years to come. In addition to use by scholars, lutheirs,musicians, and serious-minded students, the book is also an incredibly enjoyable read. On the most obvious level, it can also be savored as a compelling historical narrative. I would suggest that anyone who listens to lute music for pleasure can enjoy this book for the same kind of pleasure. --American Lutherie, (vol. 73, Spring, 2003) published by the Guild of American Luthiers, review by Bryan Johanson (Professor of Music and coordinator of guitar and harp program, Portland State University)

A HISTORY OF THE LUTE FROM ANTIQ