Items related to Controversies of the Christian Faith 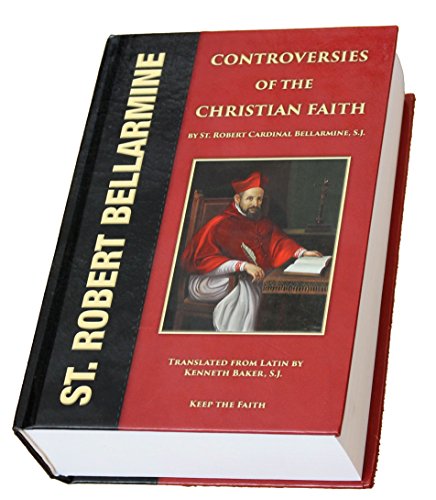 Controversies of the Christian Faith St. Robert Bellarmine (1542-1621) was the chief Catholic theologian during the latter part of the 16th century and at the beginning of the 17th century. His literary production was immense, since he produced books and treatises on most areas of theology, including Scripture, Christology, Sacraments, Liturgy, Ecclesiology and Eschatology. Among his major works are the three Controversies contained in this volume. Controversy I deals with the Bible. In it he proves that the Bible is the revealed word of God and that it contains no errors. Controversy II contains Bellarmine's defense of the Church's teaching on the divinity and humanity of Christ. In great detail he refutes the 16th century heretics who deny either the divinity of Jesus or his humanity. He also proves the distinction of the three persons in the Trinity and shows that the Second Person, or Word of God, is the one who assumed a human nature and is Jesus of Nazareth. Controversy III is centered on the Sovereign Pontiff, the Bishop of Rome. He proves the primacy of Peter among the twelve Apostles, and that that primacy is passed on to his successors. Peter and his successors are the Vicar of Christ and, by the will and power of Christ, govern the whole Church. They are the ultimate teachers of the faith. Bellarmine presents many arguments from Scripture and Tradition to prove these points. In all three Controversies he is refuting the errors of many adversaries of the Catholic Church. His favorite targets are Martin Luther and John Calvin. Robert Cardinal Bellarmine was greatly admired by bishops and Catholic theologians during his lifetime and was famous for his scholarship and preaching. He was the theologian and counselor for several Popes. He was called another Augustine, another Athanasius. He was greatly detested by Protestants because of the power of his arguments to prove that they were in error.