Items related to 50 Years of DNA 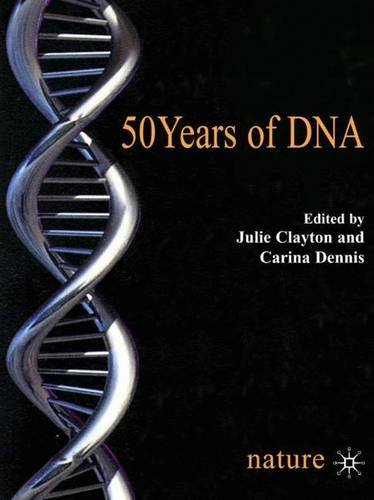 Crick and Watson's discovery of the structure of DNA 50 years ago marked one of the great turning points in the history of science. Biology, immunology, medicine and genetics have all been radically transformed in the succeeding half-century, and the double helix has become an icon of our times. Published in association with Nature, this fascinating exploration of a scientific phenomenon provides an engaging account of the background and context for the discovery, its significance and afterlife. A series of essays by leading scientists, historians and commentators offer unique perspectives on DNA and its impact on modern science and society.

Julie Clayton is a freelance science writer. She has worked as an assistant producer for the BBC on television documentaries, and has published widely in Nature, New Scientist and many other scientific journals and websites. Carina Dennis is a freelance science writer based in Australia, having previously worked in Washington, D.C. as Senior Editor at Nature responsible for genetics and genomics, and in New York City at Nature Genetics.

Published in association with the prestigious science journal Nature (which in 1953 published the original article on the double helix by James Watson and Francis Crick), this celebration of the 50th anniversary of the discovery of the structure of DNA includes essays from the principals, Watson, Crick and Rosalind Franklin, as well as contributions from other noted writers. The editors have crafted a concise, reader-friendly and handsomely illustrated history of the discovery that revolutionized biology in the second half of the 20th century, beginning with its antecedents in the work of Gregor Mendel and ending with contemporary challenges and controversies about cloning and "designer" babies. A timeline lists notable events in the history of DNA research, and a facsimile of Watson and Crick's original article appears, followed by a look at the discovery's "lukewarm" reception in the media of the time. This is a very useful guide for anyone interested in a major scientific accomplishment and its legacy.
Copyright 2003 Reed Business Information, Inc.