Army, Department Of The 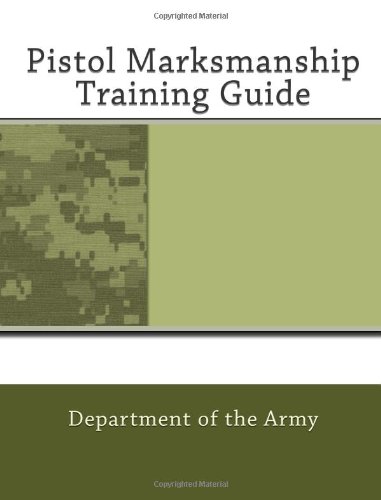 The fundamentals of pistol marksmanship embrace all of those physical factors essential to the firing of an accurate shot. Accuracy, in this sense, assumes that the weapon is zeroed, that a high degree of inherent accuracy exists in both the weapon and the ammunition, and that the firing is taking place under ideal conditions. Essentially, accurate shooting with a pistol requires no elements other than those described in the following sentence: ALIGN THE SIGHTS PROPERLY ON THAT PART OF THE TARGET REQUIRED FOR YOUR GROUP TO CENTER IN THE TARGET AREA AND CAUSE THE HAMMER TO FALL WITHOUT DISTURBING THAT ALIGNMENT. All elements of pistol shooting such as position, grip, sight alignment, breath control, trigger control, physical condition, and psychology of shooting, when perfected, simply enables the shooter to perform the action described in the above key sentence. In order for a shot to be accurate, it is first necessary to make sure that the pistol will be held as motionless as it is possible to do so during the time that the shot is being fired. The stance assumed by the shooter must provide the greatest stability possible for both the shooter's body and the weapon. To obtain a minimum arc of movement the shooter must give the pistol a definite stability of direction. Proper body position points the pistol directly toward the target with no tendency to drift or move to either side. Likewise, the vertical movement of the pistol is confined to the aiming area. Breathing is accompanied by the rhythmic movement of the chest, and in order to keep the pistol as immobile as possible the shooter must hold his breath for the length of time required to deliver an accurate shot. To obtain correct sight alignment, it is necessary for the shooter to grip the pistol in a manner which guarantees that he is holding the pistol firmly and that trigger pressure is applied straight to the rear. The delicate balance of sight alignment and minimum arc of movement can be easily disturbed if the trigger is activated in a manner which causes excess movement. However, since the shooter cannot achieve complete immobility when assuming the stance and position, the trigger has to be pressed during some movement of the pistol. In order to deliver an accurate shot within his ability to hold, the shooter must not only press the trigger evenly, but he must to so with correct sight alignment. The size of the shot group will, therefore, not exceed the dimensions of the arc of movement, provided the shot breaks as a surprise and no reflex action of muscles disturbs the delivery of the shot. To help the shooter acquire the necessary knowledge to master all the factors that control his shooting we shall analyze In detail each separate element of accurate shooting - stance, position, grip, holding the breath, sight alignment, and control of the trigger. Also included will be certain methods of training that will accelerate the shooter's development into a champion pistol shot. This status is achieved only after the shooter has mastered the technique of executing the fundamentals.