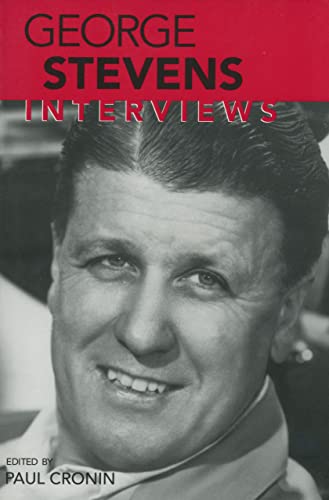 At first glance, George Stevens (1904Đ1975) appears to be the quintessential Hollywood director. A closer look at his achievements shows him to be more than just the creator of some of the smartest melodramas and comedies of the 1930s and 1940s, including Annie Oakley, Swing Time, and Gunga Din. Several of his films--Giant, The Diary of Anne Frank, Shane, The Greatest Story Ever Told, and A Place in the Sun--are regarded as some of the most important and enduring dramas of postwar American cinema. As a leading producer and director of his era, Stevens repeatedly pushed against the Hollywood grain and clashed with censors.

George Stevens: Interviews showcases the deep moral vision of a director who is as meticulous, discerning, and contemplative in his conversations as he is as a filmmaker. Although not regarded as an auteur during his career, Stevens can now be understood as one of America's most personal and distinguished directors. Throughout this collection, his increasing concern over the control of his films is evident, and, like Alfred Hitchcock and Howard Hawks, he became a producer/director who claimed absolute control over his work. His interviews show a man committed to his chosen art and fully aware of the responsibilities that come with that choice.

Paul Cronin is a writer and filmmaker.

Interviews that showcase the deep moral vision of a director who is as meticulous, discerning, and contemplative in his conversations as he is in his filmmaking

About the Author:
Paul Cronin is a writer and filmmaker.

Buy Used
Condition: As New
Like New Learn more about this copy

Shipping: US$ 24.59
From United Kingdom to U.S.A.
Destination, rates & speeds