Items related to Miniature Empires: A Historical Dictionary of the Newly...

Miniature Empires: A Historical Dictionary of the Newly Independent States 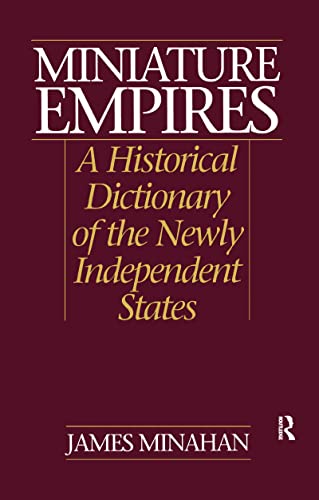 The 20th century's most protracted conflict, the Cold War, also provided the longest and most stable peace in the history of the modern world--a fragile peace that came at the price of national freedom for many people. With the demise of the Cold War, new nearly-unknown countries, long ignored or suppressed, came to the attention of the world, as ethnic and national conflicts, rooted in the multi-ethnic populations of the newly independent states, emerged. From Bosnia-Herzegovina and Macedonia to Eritrea and Uzbekistan, Miniature Empires provides an essential guide to the states recognized since 1989 and the "nations" that dwell within their borders.

Miniature Empires is the first reference book to address the post-Cold War nationalist resurgence by focusing on the nations within the new nation-states--both the core nationalities and the national minorities. Each article highlights the historical, political, social, and economic evolution of the new nations.

An essential guide to the new states, ignored or suppressed during the Cold War, and the nations that dwell in their borders.

JAMES MINAHAN is an independent researcher living in Barcelona, Spain. He is the author of Nations Without States: A Historical Dictionary of Contemporary National Movements (Greenwood, 1996), which was named an ALA/RASD 1996 Outstanding Reference Source.

1. Miniature Empires: A Historical Dictionary of the Newly Independent States

Shipping: US$ 25.37
From United Kingdom to U.S.A.
Destination, rates & speeds