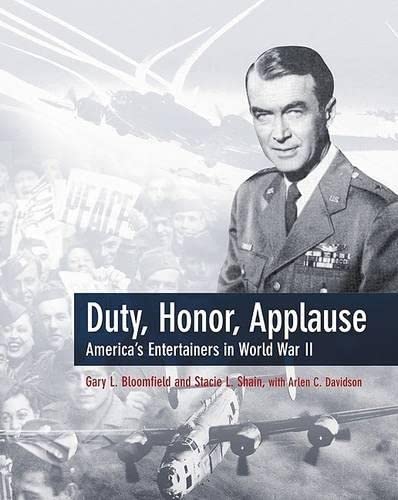 A moving tribute to the greatest generation of entertainers.

From Jack Benny and his screeching violin to Red Skelton and his cast of zany characters, Charlie Chaplin mimicking a raving lunatic, and Orson Welles ominously threatening a Martian invasion-these entertainers and hundreds more created memorable characters on the silver screen or dastardly fiends on the radio. It was a great era for fans. It was even greater to be an entertainer in the thirties. Unfortunately, it couldn't last.
December 7, 1941, was the hay maker that shoved America into war with the Axis-Powers. Literally overnight, just as thousands of its craftsmen and performers were enlisting for the duration, Hollywood geared up and cranked out a steady stream of war movies. Many were stinkers, but a handful were classics that rank right up there with the very best.
Many entertainers traveled to military camps across the country to perform for the troops and let them know how everyone back home missed them. The most difficult assignment was going to the hospitals and seeing young men, busted up and down-hearted. Yet hundreds of stars, such as Esther Williams, spent time with the boys, and dished out some TLC in just the right doses. Many future stars were wounded overseas, such as Neville Brand, Charles Durning, and Lee Marvin.
As soon as it was allowed, hundreds of entertainers headed overseas to play for the boys. Comedian Joe E. Brown was the first, Bob Hope was probably the best known, and Marlene Dietrich was the most daring. Gary Cooper and Humphrey Bogart may not have won any awards for their singing and dancing, but they learned that they could reprise their film roles and win the guys over. Of course, for starlets such as Frances Langford, Carole Landis, and Dorothy Lamour, all they had to do was flash a little leg or muss up a guy's hair and whisper in his ear!
Uncle Sam didn't make many exceptions, and thousands of entertainers were called up. Hollywood's heartthrobs such as Jimmy Stewart and Clark Gable, Victor Mature and Mickey Rooney all served, some as combatants, others continuing as entertainers in uniform. After the war many servicemen took advantage of the GI Bill and gave acting a try. Walter Matthau, Sidney Poitier, and Charles Bronson were just a few of the many rising stars who came out of World War II, ready to grasp whatever life had to offer, with all the trimmings.
0They're all here, the entertainers of WWII, the performing members of The Greatest Generation in American history.

GARY L. BLOOMFIELD, son of an army veteran, is himself a veteran who served two tours in Korea during the 1970s. An award-winning photojournalist, he is a former managing editor of VFW magazine. He lives in Kansas City, Missouri.

ARLEN C. DAVIDSON is the son of a World War II Army Air Corps veteran, and himself a Vietnam veteran with three combat tours. He retired from the military in 2001 after thirty-two years and is now a public affairs spokesman and awardwinning writer with the Army. He lives in Leavenworth, Kansas.