Items related to The Politically Incorrect Guide to Women, Sex And Feminism... 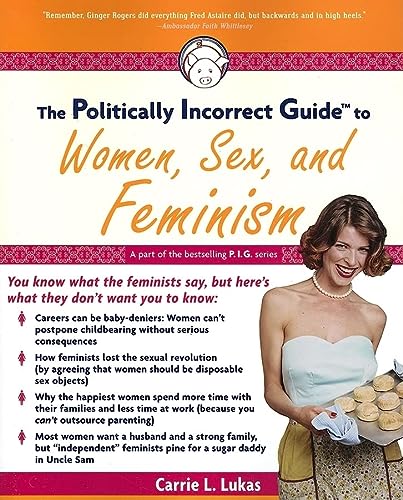 We were raised to think we could have it all. In college we were told that men weren’t necessary. Pop culture told us that career not family came first. The idea of being a stay-at-home mom was for losers. And yet are we happier than our mothers or grandmothers, who grew up before women were "liberated" by the sexual revolution? For many women, the answer is no. In The Politically Incorrect Guide™ to Women, Sex, and Feminism, Carrie Lukas, a young career woman and new mother, sets the record straight: correcting the lies women have been told and slamming the door on the screaming harpies of NOW, feminist professors, and the rest of the bra-burners who have done so much to wreck women’s lives.

* Women’s lib has "liberated" men from having to commit, "freed" women from marriage, and often "unshackled" women from having a family. * More than ever, women in their twenties and thirties live alone, are discarded by boyfriends after "living together," and are watching their biological clocks tick past the point of no return. * Women still prefer men who are breadwinners and can protect them physically.

Carrie Lukas is the vice president for policy and economics at the Independent Women’s Forum. She is a senior fellow at the Goldwater Institute and a contributor

to National Review Online. She holds a master’s degree from the Kennedy School of Government at Harvard University and a bachelor’s degree from Princeton.

5. The Politically Incorrect Guide to Women, Sex and Feminism