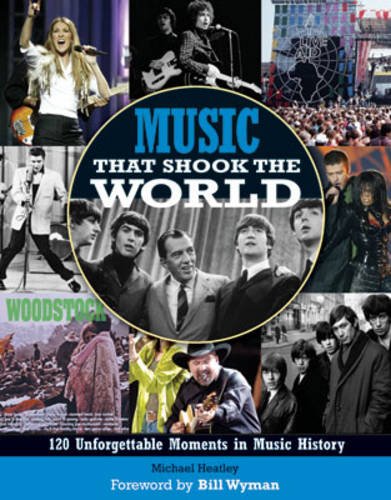 Can you remember where you were when you heard John Lennon had died? Did you queue to watch Saturday Night Fever or rush out to buy With The Beatles when it was first released? Did you witness Justin Timberlake's national TV superbowl blunder or tune in to see the verdict in the Michael Jackson trial? 'Massive Music Moments' chronicles over 100 of the most memorable music events of the last fifty years, whether shocking, shameful, uplifting or inspiring. Unfolding chronologically the moments from music history to include the great album launches, the killer hit singles, the Broadway musical openings, the rock star excesses, the sad demises and the monster music festivals such as Live Aid, Woodstock and the 2006 Make Poverty History concerts around the world, which ended with a once-only reunion of Pink Floyd. Each event is featured in a double-page spread along with news and trivia from the time. Starting in 1955, the year that Bill Haley performed Rock Around The Clock in the film Blackboard Jungle and moving through to 2007, every year has its own timeline entry listing the key album and single No.1s, plus other groundbreaking records and news. These are combined with quotes from some of the major players and additional background information in box-outs. 'Massive Music Moments' is a comprehensive and accessible record of music history covering the last fifty years.

Michael Heatley has written over 100 books, ranging from rock and pop biographies to popular science, humour and sports titles. He has contributed to many rock music encyclopedias, including the Virgin Encyclopedia of Rock (1996), and music biographies, including Eminem (2001) and Deep Purple (2007). He has written for magazines including Music Week, Billboard and Record Collector. His most recent titles for Anova include: Music That Shook The World (2008), Stars and Guitars (2010) and The Girl in The Song (2010).

1. Music That Shook The World

Book Description Collins and Brown, 2008. Paperback. Condition: Used; Good. **Simply Brit** Shipped with Premium postal service within 24 hours from the UK with impressive delivery time. We have dispatched from our book depository; items of good condition to over ten million satisfied customers worldwide. We are committed to providing you with reliable and efficient service at all times. Seller Inventory # 2840830

Shipping: US$ 8.78
From United Kingdom to U.S.A.
Destination, rates & speeds