Items related to Crossing Continents: A History of Standard Chartered... 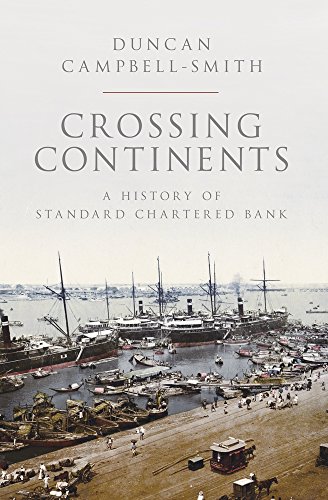 Bundled together in 1969 to stymie an international takeover attempt on the part of Chase Manhattan Bank of New York, Standard Chartered Bank has come to consolidate its status as one of the world's leading international banks with remarkable success. Crossing Continents draws together into one narrative the evolution both of the modern banking group and of the separate banks—originally established in 19th Century South Africa and the Far East—that preceded it. In so doing, it offers glimpses not just into seminal developments in financial history, but also into the world-historical events which have provided their backdrop, into the young men who turned their backs on careers in Britain to cross continents in search of a more adventurous life, and, colorfully, into the 1980s Big Bang that so transformed the City of London. Written with complete access to the bank's archives and personnel, Duncan Campbell-Smith's authorized history of Standard Chartered Bank shows us why British overseas banking was so often seen in the past, at home and abroad, less as a single-minded pursuit of money for its own sake than as a true hybrid of commerce and public service.

Duncan Campbell-Smith is a former Financial Times and Economist journalist. He holds Visiting Senior Research Fellowships at the Institute of Historical Research and at King's College London. His previous books include Follow the Money: The Audit Commission, Public Money and the Management of Public Services, 1983-2008 and Masters of the Post: The Authorized History of the Royal Mail, which won the Wadsworth Prize for the Best Business History Book of the Year.