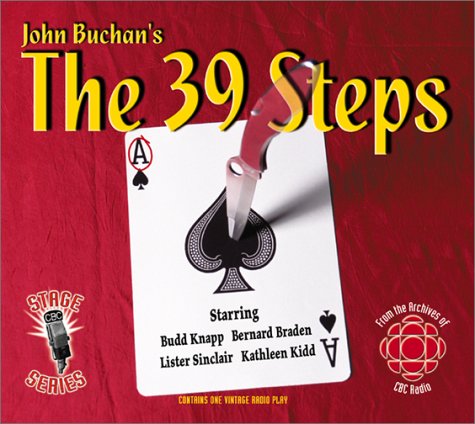 The Butler runs into a room in Mr. Richard Hannayąs apartment as a secret agent lies dying on the floor. A dagger in his back, writhing in pain, the agent sputters łTell Mr. Hannay, the 39 steps, high tide..,˛ and dies. Mr. Hannay returns and as he and his Butler discuss the precarious situation, another knife flies into the room and sticks into the wall. Stuck to the blade is an ace of spades with a red circle around the A. Itąs the calling card of The Blackstone, an international spy ring. This means certain death. Mr. Hannay embarks on a murder mystery adventure that involves assassination, secret plans and impostors. The 39 Steps is the 1947 CBC Stage Seriesą adaptation of John Buchanąs classic thriller. Starring: Budd Knapp, Bernard Braden, Lister Sinclair, Kathleen Kidd and others. Produced and Directed by Andrew Allan. Original Music Composed by Lucio Agostini. CBC Stage Series. Originally Broadcast 1947.

Scottish author John Buchan (1875–1940) was both an acclaimed writer of adventure novels and, as the Governor General of Canada, one of the most high-ranking colonial administrators in the British Empire. His political career usually took precedence over his writing, but he still managed to produce several iconic works of spy fiction, including his masterpiece The Thirty-Nine Steps.

This enjoyable 1947 radio adaptation of John Buchan's 1916 thriller comes from the vaults of the CBC. More faithful to Buchan's novel than was Alfred Hitchcock's 1935 film adaptation, Charles Rittenhouse's script also makes fine use of the sound medium. Musical chords punctuate dramatic moments. A montage of train sounds and conversational snatches succinctly maps hero Richard Hannay's escape from London and the clutches of a spy ring. After he disguises himself in the garb of a cooperative milkman, Hannay's innocent whistling lets us trace his steps as he nonchalantly slips past the police. Two badly muffled passages turn up, as expected with historic radio transcriptions, but the play is fast-paced fun. G.H. © AudioFile 2002, Portland, Maine-- Copyright © AudioFile, Portland, Maine