Items related to Counter-Strike from the Sky: The Rhodesian All-Arms...

Wood, J.R.T Counter-Strike from the Sky: The Rhodesian All-Arms Fireforce in the War in the Bush, 1974-1980

Counter-Strike from the Sky: The Rhodesian All-Arms Fireforce in the War in the Bush, 1974-1980 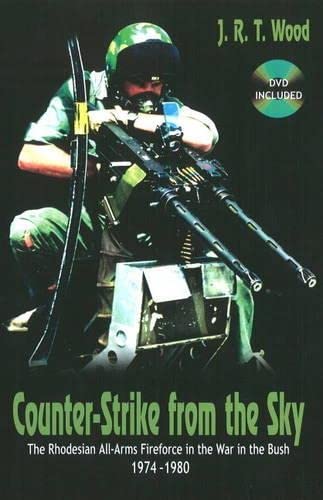 Fireforce as a military concept dates from 1974 when the Rhodesian Air Force (RhAF) acquired the French MG151 20mm cannon from the Portuguese. Coupled with this, the traditional counter-insurgency tactics (against Mugabe’s ZANLA and Nkomo’s ZIPRA) of follow-ups, tracking and ambushing simply weren’t producing satisfactory results. Visionary RhAF and Rhodesian Light Infantry (RLI) officers thus expanded on the idea of a ‘vertical envelopment’ of the enemy (first practiced by SAS paratroopers in Mozambique in 1973), with the 20mm cannon being the principle weapon of attack, mounted in an Alouette III K-Car (‘Killer car’), flown by the air force commander, with the army commander on board directing his ground troops deployed from G-Cars (Alouette III troop-carrying gunships and latterly Bell ‘Hueys’ in 1979) and parachuted from DC-3 Dakotas. In support would be a propeller-driven ground-attack aircraft armed with front guns, pods of napalm, white phosphorus rockets and a variety of Rhodesian-designed bombs; on call would be Canberra bombers, Hawker Hunter and Vampire jets.

To learn more about Fireforce as a military concept, go to: http://www.youtube.com/watch?v=4qExzmagt5o

Dr. RICHARD WOOD, (Hons) (Rhodes), PhD (Edinburgh), FRHistS was born in Rhodesia (Zimbabwe). He was educated at St George’s College, Rhodes University in Grahamstown, South Africa, and Edinburgh University, Scotland. He was a Commonwealth scholar and a Fellow of the Royal Historical Society. He was the Ernest Oppenheimer Memorial Research Fellow at the University of Rhodesia and a Professor of History at the University of Durban-Westville. He is undoubtedly the foremost historian and researcher on the history of Rhodesia in the decades following World War II and, with exclusive access to the hitherto closed papers of Ian Smith, has written three definitive publications: The Welensky Papers; So Far and No Further! and A Matter of Weeks Rather than Months. He is a renowned military historian, having served as a territorial soldier in the Rhodesia Regiment, and the Mapping & Research Unit of the Rhodesian Intelligence Corps. He has published The War Diaries of André Dennison (1989), numerous articles, conference papers and chapters in books. He has a lifelong interest in matters military, rugby and fly-fishing. He lives in Durban, South Africa with his wife Carole.

".... a very enjoyable book and JRT Wood does a commendable job at shedding light upon a concept of operations that served its originators very well" (Major Chris Buckham, Logistics Officer in the Royal Canadian Air Force)