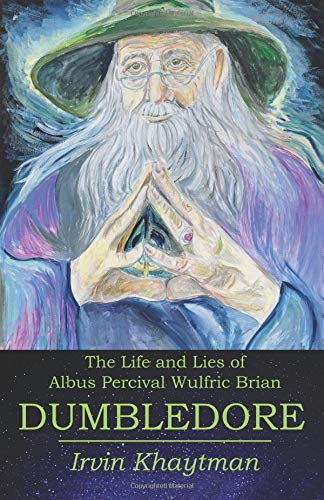 Albus Dumbledore was the most famous wizard of his age. His accomplishments were legion: Headmaster of Hogwarts School of Witchcraft and Wizardry, Chief Warlock of the Wizengamot, and Supreme Mugwump of the International Confederation of Wizards, to name a few. After his defeat of the dark wizard Grindelwald, Albus Dumbledore was awarded an Order of Merlin, First Class. All this and more was revealed on the Chocolate Frog card Harry Potter read on the Hogwarts Express his first year of school. And yet these remarkable achievements merely scratch the surface of the nimble and brilliant leader. Who was Albus Percival Wulfric Brian Dumbledore, really? He has fans and detractors, and his reputation was both proved and debunked during the unfolding of Harry Potter’s story. Albus Dumbledore has become one of the most discussed and debated characters in modern fiction. Was he Machiavellian, as some claim? Was he a doddering old fool? Or was he merely an aging, powerful, charismatic leader doing his best to keep his world from crumbling? Irvin Khaytman explores all these questions as he takes us on a journey not only through the books, but also through the many theories put forth by other Harry Potter fans across two decades. His delightful narrative style draws the reader in - whether you're a long-time fan or new to the series, by the time you reach the end, you'll feel like a magical world insider.

About the Author:
Attractive brunette Irvin Khaytman, twenty-six, whose savage quill has punctured many inflated reputations— Never mind all that. Irvin Khaytman is a walking Harry Potter encyclopedia from New York City, where he does taxes by day and all things geeky by night. He has been writing essays about Harry Potter since 2007 as “hpboy13” and became a columnist at MuggleNet in 2011. In the last few years, he has also been a regular contributor to Hypable. When not reading or discussing books, Irvin can be found dancing to wizard rock or planning costumes for conventions. He identifies as a Ravenpuff.
Review:
"Potterheads rejoice! Longtime Harry Potter fan Irvin Khaytman has provided a deep investigation of all things Albus Dumbledore in his new book The Life and Lies of Albus Percival Wulfric Dumbledore.[...]  Dumbledore's invisible hand was always at work, and Khaytman teases out the threads in that plan with superb analysis.
[...] Although we as readers always felt that Dumbledore knew all, we gain even more respect after the comprehensive portrait provided in this volume. [...] Perhaps the greatest gift of this book is the challenge for each fan to now judge Dumbledore's morality himself or herself, based on accurate facts and thorough analysis. The intense scrutiny provided here helps us see the entirety of Dumbledore's character.  Khaytman pays Dumbledore the greatest compliment of all: the proof that he was human after all."   - Cathy Leogrande (professor at Le Moyne College of "Harry Potter Across the Curriculum: Multidisciplinary Approaches")

"This book is a must-read for any Harry Potter enthusiast. An engaging, in-depth, comprehensive and unique examination of one of J.K. Rowling's most enigmatic stars. It's premise and execution has the polish and power of an academic dissertation while being an extremely accessible, enjoyable read. The author's passion radiates through the text while taking pains not to alienate those who may be more of a Hogwarts hobbyist rather than a devotee.
The author generously encourages the reader, right from the start, to actively discuss - even challenge and question - this text. In this, Mr. Khaytman furthers what may be the most critical aspect of Harry Potter as a literary phenomenon. This book is an impetus to engage further with a dynamic, enthusiastic global community who knows that books and love are the most powerful magic of all."   - Leanna Renee Hieber (Darker Still, the Strangely Beautiful saga)

"Every Harry Potter fan who reads and re-reads the books is left with a sense that there's a lot more to the saga than can be found on the page. No worries, leave it to Irvin Khaytman, who has been a Potter scholar and essayist for most of his life, to present this carefully researched and brilliantly written walk through all seven novels, laying out a very plausible scenario for what Dumbledore knew and when. The book is a must-read for any serious Harry Potter fan."   - Steve Vander Ark (The Harry Potter Lexicon, In Search of Harry Potter)

"Between his deep understanding of the Harry Potter series and his excellent writing skills, Irvin's "The Life and Lies of Albus Dumbledore" is a must-read for Harry Potter fans who can't get enough of the Wizarding World. The book impressively explores the most fascinating character in the series and gives fans a lot to think about. Get ready to see Dumbledore in a whole new light."   - Andrew Sims (MuggleCast, Hypable)

"Dumbledore:  greatest of teachers or Machiavellian schemer?  Irvin Khaytman reconciles these aspects of the character through an investigation of Dumbledore's final years, particularly his last great project:  the race to identify and destroy Voldemort's Horcruxes.  The Harry Potter series may be finished, but we still have much to discover about Dumbledore, whether through the Fantastic Beasts films or through this steady-eyed analysis.  If your understanding of love, death, and goodness have been influenced by these stories -- if you're part of the Harry Potter generation -- then this book is for you."   - Lorrie Kim (SNAPE: A Definitive Reading)

Book Description Condition: Good. Book is in Used-Good condition. Pages and cover are clean and intact. Used items may not include supplementary materials such as CDs or access codes. May show signs of minor shelf wear and contain limited notes and highlighting. Seller Inventory # 1940699215-2-4

Book Description Condition: Good. Buy with confidence! Book is in good condition with minor wear to the pages, binding, and minor marks within. Seller Inventory # bk1940699215xvz189zvxgdd

Book Description Paperback. Condition: Very Good. Item is in very good condition. If supplemental codes/CDs for textbooks are required please contact us prior to purchasing as they may be missing. Photos are stock pictures and not of the actual item. Seller Inventory # DS-1940699215-2