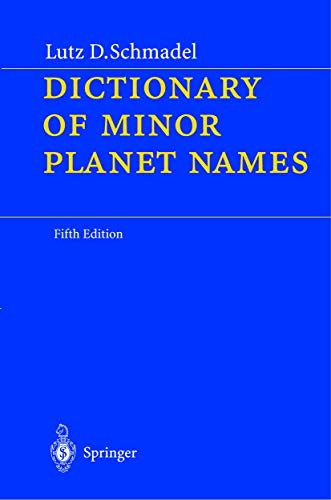 This fifth edition is the official reference for the field of the IAU, the internationally recognised authority for assigning designations to celestial bodies and any surface features on them. It provides authoritative information about the basis for all names of minor planets.

Dictionary of Minor Planet Names, Fifth Edition, is the official reference for the field of the IAU, which serves as the internationally recognised authority for assigning designations to celestial bodies and any surface features on them. The accelerating rate of the discovery of minor planets has not only made a new edition of this established compendium necessary but has also significantly altered its scope: this thoroughly revised edition concentrates on the approximately 10,000 minor planets that carry a name. It provides authoritative information about the basis for all names of minor planets. In addition to being of practical value for identification purposes, this collection provides a most interesting historical insight into the work of those astronomers who over two centuries vested their affinities in a rich and colorful variety of ingenious names, from heavenly goddesses to more prosaic constructions. The fifth edition serves as the primary reference, with plans for complementary booklets with newly named bodies to be issued every three years.

Dr. Lutz D. Schmadel, astronomer and computer of orbits and ephemerides of minor planets at Astronomisches Rechen-Institut, Heidelberg, has discovered more than 230 minor planets and has done great service to the community by preparing the Dictionary of Minor Planet Names (now in its 6th edition) on behalf of Commision 20 of the International Astronomical Union (IAU). As member of the IAU he is affiliated to several divisions and commisions including Division III Commission 20 (Positions & Motions of Minor Planets, Comets & Satellites), Commission 5 (Documentation & Astronomical Data), Commission 41 (History of Astronomy), as well as the Committee on Small Bodies Nomenclature (CSBN)".