Items related to The Engineer of Human Souls 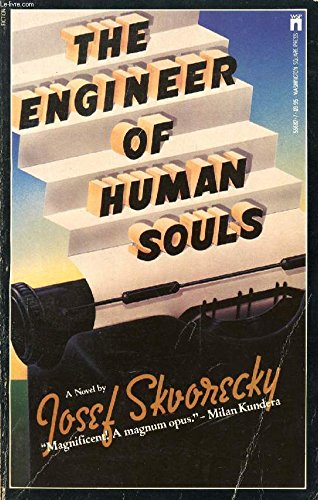 Danny Smiricky is a Czech writer who fled his country in 1968 to find asylum in the sheltered world of Edenvale College in Toronto. His New World is an Eden that he sees with Old World eyes; he is touched and exasperated bt its political innocence, wryly amused by the hilarious counter-revolutionary schemes of his fellow emigres, tormented by the Soviet secret agents who dog his footsteps, and he succumbs to the determined flirtations of his prettiest student. At the same time he is undone by memories... of a homeland as lost to him as his youth... of Nadia, the factory girl who was hos first lover... of his career as girl-chaser and feckless hero of the Resistance in a small Bohemian village under the pall of the Nazi occupation, and later under Stalin... a world of heroes, traitors and innocents. --- from book's back cover

The engineer of human souls

Book Description Paperback. Condition: Good. Item is in good condition. Some moderate creases and wear. This item may not come with CDs or additional parts including access codes for textbooks. Might be an ex-library copy and contain writing/highlighting. Photos are stock pictures and not of the actual item. Seller Inventory # DS-0002228521-3

Engineer Of Human Souls, The

Book Description Paperback. Condition: Very Good. Trade Paperback in Very Good condition with a tight binding and an unmarked text, age tanning to the page edges. Very light spine creasing with cover edgewear. "The Engineer of Human Souls is a labyrinthine comic novel that investigates the journey and plight of novelist Danny Smiricky, a Czech immigrant to Canada. As the novel begins, he is a professor of American literature at a college in Toronto. Out of touch with his young students, and hounded by the Czech secret police, Danny is let loose to roam between past and present, adopting whatever identity that he chooses or has been imposed upon him by History." ; 7.70 X 5.10 X 1.20 inches; 571 pages. Seller Inventory # 19360

Engineer Of Human Souls, The