Items related to Death on Deadline 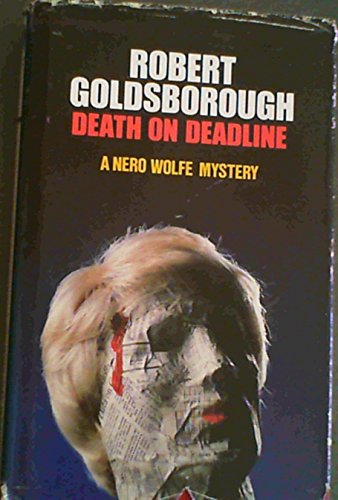 To save his favorite newspaper, Wolfe steps into the crossfire of a tabloid war.

Master sleuth Nero Wolfe’s small circle of friends is limited to his assistant, Archie Goodwin; his chef, Fritz; and Lon Cohen, the head man at the New York Gazette. Cohen knows more about the city’s power structure than any man in Manhattan, and for years he happily passed Wolfe information in return for the odd exclusive scoop. But now Cohen needs Wolfe’s help, for the Gazette is ailing and the vultures have begun to circle. Scottish newspaper magnate Ian MacLaren plans to gut the paper and turn it into a sex-filled conservative rag. Standing in his way is the company’s chief shareholder, Gazette heir Harriet Haverhill. But when the aged Ms. Haverhill dies in an apparent suicide, no one remains to resist the Scot’s advances except Wolfe. MacLaren may be fierce, but when the cause is just, Nero Wolfe knows how to play dirty, too.

Robert Goldsborough (b. 1937) is an American author best known for continuing Rex Stout’s famous Nero Wolfe series. Born in Chicago, he attended Northwestern University, and upon graduation went to work for the Associated Press, beginning a lifelong career in journalism that would include long periods at the Chicago Tribune and Advertising Age. While at the Tribune, Goldsborough began writing mysteries in the voice of Rex Stout, the creator of iconic sleuths Nero Wolfe and Archie Goodwin. Goldsborough’s first novel starring Wolfe, Murder in E Minor (1986), was met with acclaim both from critics and devoted fans, winning a Nero Award from the Wolfe Pack. Six more novels followed, including Death on Deadline (1987) and Fade to Black (1990). In 2005, Goldsborough published Three Strikes You’re Dead, the first in an original series starring Chicago Tribune reporter Snap Malek. His most recent novel is Terror at the Fair (2011).

Goldsborough's Murder in E Minor authentically revived the late Rex Stout's famed Nero Wolfe and company, busy again in this appealing sequel. The unbeatable sleuth's trusty assistant, Archie Goodwin, tells of events Wolfe investigates without stirring from his Manhattan brownstone. Convinced that elderly Harriet Haverhill was murdered, the detective disputes the official verdict of suicide. Proud of her family-owned newspaper, the Gazette, Haverhill had rejected lucrative offers from a sleazy tycoon who wants to turn the daily into another of his sensationalistic scandal sheets. Mrs. Haverhill's kin and other stockholders seem eager to sell out, however, and Wolfe intends to prove that one of them is a killer for profit. He does, as Archie assembles all concerned to hear the great man pronounce judgment, ending a dandy story.
Copyright 1987 Reed Business Information, Inc.

1. Death on a Deadline

Book Description Collins, 1989. Hardcover. Condition: Near Fine. Dust Jacket Condition: Fair. 1st Edition. The book is in an excellent condition. It is very slightly bent on the edges of the spine. Other than that it shows very little wear. The binding is excellent and the contents are complete. The dust jacket is a little edge worn and has some tears. It is also shows signs of shelf marking and rubbing in some places. B.K. Our orders are shipped using tracked courier delivery services. Seller Inventory # ollx

Shipping: US$ 17.97
From United Kingdom to U.S.A.
Destination, rates & speeds