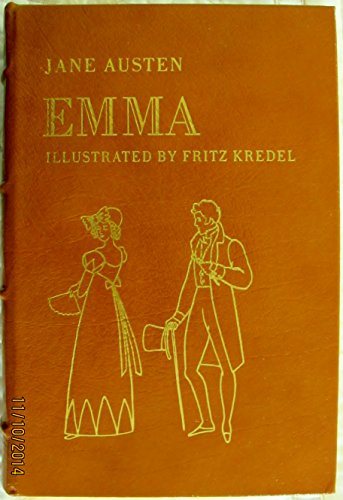 Of all Jane Austen's heroines, Emma Woodhouse is the most flawed, the most infuriating, and, in the end, the most endearing. Pride and Prejudice's Lizzie Bennet has more wit and sparkle; Catherine Morland in Northanger Abbey more imagination; and Sense and Sensibility's Elinor Dashwood certainly more sense--but Emma is lovable precisely because she is so imperfect. Austen only completed six novels in her lifetime, of which five feature young women whose chances for making a good marriage depend greatly on financial issues, and whose prospects if they fail are rather grim. Emma is the exception: "Emma Woodhouse, handsome, clever, and rich, with a comfortable home and happy disposition seemed to unite some of the best blessings of existence; and had lived nearly twenty-one years in the world with very little to distress or vex her." One may be tempted to wonder what Austen could possibly find to say about so fortunate a character. The answer is, quite a lot.

For Emma, raised to think well of herself, has such a high opinion of her own worth that it blinds her to the opinions of others. The story revolves around a comedy of errors: Emma befriends Harriet Smith, a young woman of unknown parentage, and attempts to remake her in her own image. Ignoring the gaping difference in their respective fortunes and stations in life, Emma convinces herself and her friend that Harriet should look as high as Emma herself might for a husband--and she zeroes in on an ambitious vicar as the perfect match. At the same time, she reads too much into a flirtation with Frank Churchill, the newly arrived son of family friends, and thoughtlessly starts a rumor about poor but beautiful Jane Fairfax, the beloved niece of two genteelly impoverished elderly ladies in the village. As Emma's fantastically misguided schemes threaten to surge out of control, the voice of reason is provided by Mr. Knightly, the Woodhouse's longtime friend and neighbor. Though Austen herself described Emma as "a heroine whom no one but myself will much like," she endowed her creation with enough charm to see her through her most egregious behavior, and the saving grace of being able to learn from her mistakes. By the end of the novel Harriet, Frank, and Jane are all properly accounted for, Emma is wiser (though certainly not sadder), and the reader has had the satisfaction of enjoying Jane Austen at the height of her powers. --Alix Wilber

Emma is Austen's most technically accomplished novel, with a hidden plot, the full implications of which are only revealed by a second reading. The text presented here retains the spelling and punctuation of the first edition of 1816, allowing readers to see the novel as Austen's contemporaries first encountered it. The volume provides comprehensive explanatory notes, an extensive critical introduction, a chronology of Austen's life, and an authoritative textual apparatus. This edition is an indispensable resource for all scholars and readers of Austen.