Items related to Tropic of Cancer 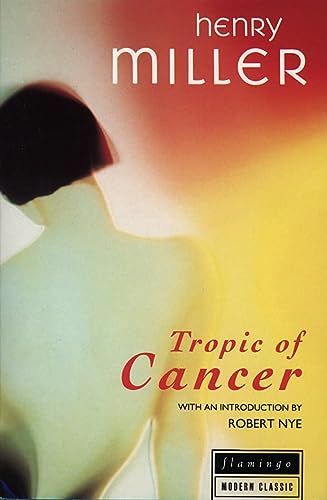 Miller's groundbreaking first novel, banned in Britain for almost thirty years, now reinvigorated in a new Harper Perennial Modern Classics edition. A penniless and as yet unpublished writer, Henry Miller arrived in Paris in 1930. Leaving behind a disintegrating marriage and an unhappy career in America, he threw himself into the low-life of bohemian Paris with unwavering gusto. A fictional account of Miller's adventures amongst the prostitutes and pimps, the penniless painters and writers of Montparnasse, Tropic of Cancer is an extravagant and rhapsodic hymn to a world of unrivalled eroticism and freedom. Tropic of Cancer's 1934 publication in France was hailed by Samuel Beckett as 'a momentous event in the history of modern writing'. The novel was subsequently banned in the UK and the USA and not released for publication for a further thirty years.

No punches are pulled in Henry Miller's most famous work. Still pretty rough going for even our jaded sensibilities, but Tropic of Cancer is an unforgettable novel of self-confession. Maybe the most honest book ever written, this autobiographical fiction about Miller's life as an expatriate American in Paris was deemed obscene and banned from publication in this country for years. When you read this, you see immediately how much modern writers owe Miller.

Henry Miller was born in Brooklyn, New York. In 1930, Miller went to live in Paris. For the next ten years he mingled with impoverished expatriates and bohemian Parisians; his first published book, Tropic of Cancer appeared in 1934 from the Obelisk Press in Paris. It was followed five years later by its sister volume Tropic of Capricorn. Sexually explicit, these books electrified the European literary avant-garde and were almost universally banned outside France. In 1961, after an epic legal battle, Tropic of Cancer was finally published in the States (and then in England in 1963). Miller became a household name, hailed by the Sixties counter-culture as a prophet of freedom and sexual revolution. He died on June 7 1980.