Items related to Prince of the Blood

Prince of the Blood 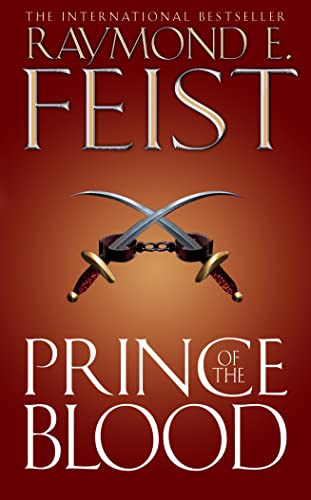 A newly revised edition of Raymond E. Feist' s continuation of his classic Riftwar series. Set twenty years after the events of the Riftwar, Prince of the Blood follows the adventures of Prince Arutha's sons in the dangerously unstable Great Empire of Kesh. Set twenty years after the events in The Riftwar Saga, Prince of the Blood follows the adventures that erupt when a group of powerful nobles attempt to overthrow the Empress of Kesh, bitterly dividing the court. In the centre of the conflict are the two princes of Krondor, Borric and Erland. When Borric escapes and makes a desperate journey back tothe court to warn of the traitor's plans -- which if they were to succeed, would start a war that would twar the Empire apart. From the author of the phenomally successful novels in The Riftwar series comes the newly revised tale of swashbuckling adventure in one of the most popular fantasy worlds ever created. Prince of the Blood is the classic, action-packed saga of conflict and love, magic and legend, from the master of epic fantasy.

This Author's Preferred Edition of Raymond E. Feist's bestselling coming-of-age saga celebrates the fifteenth anniversary of its publication. Feist introduces a new generation of readers to his riveting novel of adventure and intrigue, revised and updated as he always meant it to be written. It is a work that explores strength and weakness, hope and fear, and what it means to be a man--in a kingdom where peace is the most precious commodity of all.
If there were two more impetuous and carefree men in the Kingdom of the Isles, they had yet to be found. Twins Borric and Erland wore that mantle proudly, much to the chagrin of their father, Prince Arutha of Krondor. But their blissful youth has come to an end. Their uncle, the King, has produced no male children. Bypassing himself, Arutha names Borric, the eldest twin by seconds, the Royal Heir. As his brother, Erland will have his own great responsibilities to shoulder. To drive home their future roles, Arutha sends them as ambassadors to Kesh, the most feared nation in the world. Borric and Erland will be presented to the Queen of Kesh--the single most powerful ruler in the known world--at her Seventy-fifth Jubilee Anniversary.
But they have not even left Krondor when an assassination attempt on Borric is thwarted. Aware that he is being provoked into war, Arutha does not rise to the bait. His sons' journey will not be deterred, for nothing less than peace is riding on it. Yet there is to be no peace for the young princes. When their traveling party is ambushed, Borric disappears and is presumed dead--sending Erland into spirals of rage and grief as he is forced to navigate alone the court intrigues at Kesh. But unbeknownst toanyone, Borric lives and has escaped his captors. In a strange land, with a price on his head, Borric must use all his wits and stamina to find his way back to his brother.
On separate paths, the two men--one a fugitive and one a future king--make their journey toward maturity, honor, and duty. For every step they take could sway the fragile peace of the land, as those who crave war rally against them--and become ever more daring.

Feist is one of the world's leading fantasy writers. His Riftwar and Serpentwar Sagas have been global bestsellers for years. Born and raised in Southern California, Raymond E. Feist was educated at the University of California, San Diego, where he graduated with honours in Communication Arts. He is the author of the bestselling and critically acclaimed Riftwar Saga.

1. Prince of the Blood

2. Prince of the Blood