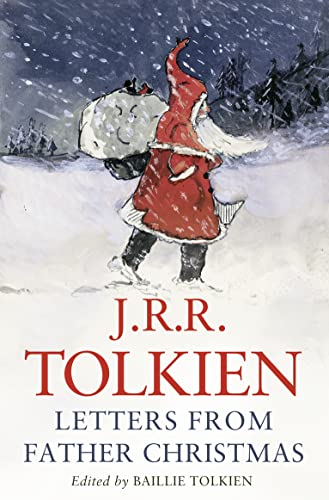 This sumptuous gift book originates from the beautiful letters and drawings that J.R.R. Tolkien, in the guise of Father Christmas, sent to his children over a twenty-year period. Including previously unpublished illustrations, facsimiles, and text, the letters tell the story of life at the North Pole, the mischievous North Polar Bear, the helpful Ilbereth the elf, and the adventures they share between Christmases. As well as beautifully reproduced pictures, the book features ten envelopes containing ten pull-out letters and pictures for readers to read, hold, and enjoy. The pull-outs are facsimile extracts of the original letters, with a simple "translation" on the back to help those who have trouble deciphering Father Christmas's shaky handwriting. An ideal Christmas gift, perfect for reading aloud to children yet collectible for adults, this enchanting book will bring Father Christmas to a whole new generation of readers.

J.R.R. TOLKIEN (1892–1973) is the creator of Middle-earth and author of such classic and extraordinary works of fiction as The Hobbit, The Lord of the Rings, and The Silmarillion. His books have been translated into more than fifty languages and have sold many millions of copies worldwide.

Don't miss this little gem amidst all the fanfare of Tolkien's novels and Hollywood film. Each year, starting in the early 1920s Tolkien responded to his children's letters to Father Christmas with notes and drawings. He introduces the chores of packing the many packages, the mishaps of weather and the mischief of his faithful helper, North Polar Bear, to his sons and daughter--whose names are added or omitted from the letters as the family grows. Derek Jacobi is fully in the spirit of these epistles, and listeners hear how Tolkien, also, elaborates with one year's letters, and can only send a few lines and a drawing the next. The one missed step is the annoying choice of just one music selection which separates the letters. Nevertheless, make this audio program a holiday tradition. R.F.W. © AudioFile 2001, Portland, Maine-- Copyright © AudioFile, Portland, Maine

Book Description Paperback. Condition: New. Rev. ed. Language: English. Brand new Book. The first ever paperback edition of Tolkien's complete Father Christmas letters, including a new introduction and rare archive materials. Every December an envelope bearing a stamp from the North Pole would arrive for J.R.R.Tolkien's children. Inside would be a letter in strange spidery handwriting and a beautiful coloured drawing or some sketches. The letters were from Father Christmas. They told wonderful tales of life at the North Pole: how all the reindeer got loose and scattered presents all over the place; how the accident-prone Polar Bear climbed the North Pole and fell through the roof of Father Christmas's house into the dining-room; how he broke the Moon into four pieces and made the Man in it fall into the back garden; how there were wars with the troublesome horde of goblins who lived in the caves beneath the house! Sometimes the Polar Bear would scrawl a note, and sometimes Ilbereth the Elf would write in his elegant flowing script, adding yet more life and humour to the stories. No reader, young or old, can fail to be charmed by the inventiveness and 'authenticity' of Tolkien's Letters from Father Christmas. To mark ten years since the publication of the complete edition of Tolkien's Letters from Father Christmas in 1999, this new edition is the first time the letters have been available in B format. Seller Inventory # AA89780007280490

Shipping: US$ 4.97
From United Kingdom to U.S.A.
Destination, rates & speeds

Shipping: US$ 8.10
From United Kingdom to U.S.A.
Destination, rates & speeds

Shipping: US$ 18.69
From United Kingdom to U.S.A.
Destination, rates & speeds