Items related to Red Sister (Book of the Ancestor)

Red Sister (Book of the Ancestor) 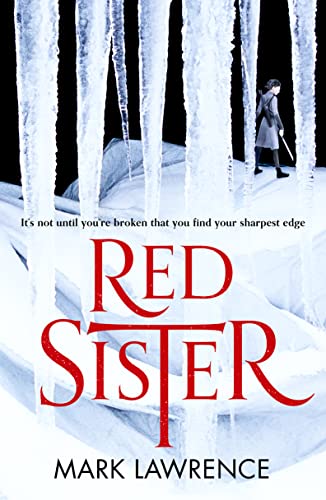 Mark Lawrence is a research scientist working on artificial intelligence. He is a dual national with both British and American citizenship, and has held secret-level clearance with both governments. At one point, he was qualified to say, “This isn’t rocket science—oh wait, it actually is.” He is the author of the Broken Empire trilogy (Prince of Thorns, King of Thorns, and Emperor of Thorns), the Red Queen’s War trilogy (Prince of Fools, The Liar’s Key, and The Wheel of Osheim) and the Book of the Ancestor series (Red Sister).

“Dark, passionate, tense, with a female hero anyone could relate to—I was utterly fascinated! This is no pretty, flowery tale, but one of vastly different people struggling to survive when a hostile government comes to power.”—Tamora Pierce, #1 New York Times bestselling author of Battle Magic

“The lyrical excellence of previous books is present in full force here and it’s fair to say that Mark Lawrence has evolved into a master of his craft. In Red Sister he has produced a novel that is as thought provoking as it is entertaining, and as poignant as it is ferocious. Highly recommended.”—Anthony Ryan, New York Times bestselling author of The Waking Fire

“In this stunning, action-filled series launch, Lawrence ('Broken Empire' trilogy) establishes a fantastic world in which religion and politics are sharp as swords, with magic and might held in the hands of wonderful and dangerous women. Impatient George R.R. Martin fans will find this a pleasing alternative until the next installment in his “A Song of Ice and Fire” saga arrives.”—Library Journal, starred review

Praise for the novels of Mark Lawrence

“Different than anything I have ever read.”—Terry Brooks, New York Times bestselling author

“An amazing series, and I eagerly anticipate Lawrence’s next literary effort, whatever it may be.”—Peter V. Brett, New York Times bestselling author

“Epic fantasy on a George R. R. Martin scale but on speed.”—Fixed on Fantasy

“Mark Lawrence’s growing army of fans will relish this rollicking new adventure and look forward to the next one.”—Daily Mail

Shipping: US$ 26.54
From United Kingdom to U.S.A.
Destination, rates & speeds