Items related to The Negro in the Making of America

Benjamin Quarles The Negro in the Making of America

The Negro in the Making of America 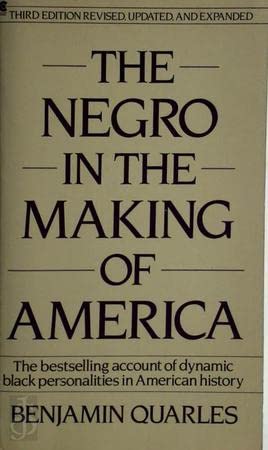 Benjamin Quarles is Emeritus Professor of History at Morgan State University in Baltimore and is the author of many books on African American history, including Frederick Douglass, The Negro in the American Revolution, Black Abolitionists, and The Negro in the Civil War.

"E pluribus unum," the national motto of the United States, means "one from many." Suggested by patriots at the outbreak of the American Revolution, this motto was originally used in a political sense, to demonstrate that out of thirteen separate states one new sovereign power had come into existence. But since the time of the Revolutionary War, this Latin expression has taken on a larger meaning. It has come to suggest that America is made up of many peoples from many lands, having become, in essence, a nation of nations. One of these many groups came from the continent of Africa, a group that was numbered among the very first to arrive in the New World.

Of the varied Old World stocks that entered America, none came from as wide a geographic area as the blacks. The vast majority came from the West Coast of Africa, a 3,000-mile stretch extending from the Senegal River, downward around the huge coastal bulge, to the southern limit of present-day Portuguese Angola. A small percentage came from Mozambique and the island of Madagascar in far-away East Africa, and still fewer came from the Sudanese grasslands that bordered the Sahara.

Just as the ancestor of the American Negro came from no single region, so he was of no single tribe or physical type. The "West Coast Negro," the predominant type that came to the New World, was marked by such characteristics as tall stature, woolly hair, broad features, full lips, little growth of hair on face or body, and a skin color approaching true black. But there was no such thing as one African "race." Slave ships bound for America carried a variety of genetic stocks, from the tallish, dark-skinned Ashanti of the forest lands north of the Gold Coast to the lighter and shorter Bantu from the Congo basin. Indeed, the difficulty of generalizing about the physical characteristics of the Negroid peoples is illustrated by the Nilotics and the Pygmies, one being the tallest group in the world (averaging nearly six feet in height) and the other being the shortest (averaging less than five feet).

These varied groups had no common tongue, no "lingua Africana." Indeed, there are more than 200 distinct languages in present-day Nigeria alone. There was no such thing as "the African personality," since the varied groups differed as much in their ways of life as in the physical characteristics they exhibited and the languages they spoke.

In their political institutions, there was much diversity. "One meets in Negro Africa," wrote Maurice Delafosse, "a whole series of States, ranging from the simple isolated family to confederations of kingdoms constituting empires." In pre-European Africa innumerable village kinship groups, no larger than a clan, were completely independent in their exercise of a kind of "grass-roots" democracy. These small political systems stood in contrast to an extensive empire-state like Songhay: at the height of its power, this empire extended from Lake Chad westward to the Atlantic, covering an area as large as Europe. Its most notable ruler was Askia Mohammed I (on the throne from 1493 to 1528), whose word carried as much authority in the hinterlands as at his own palace at Gao on the central Niger.

Although there were various types of states, the fundamental unit politically, as in other ways, was the family. This was not one man's family; rather, it was a kinship group numbering in the hundreds, but called a family because it was made up of the living descendants of a common ancestor. The dominant figure in this extended family community was the patriarch, who exercised a variety of functions, acting as peacemaker, judge, administrator, and keeper of the purse. The patriarch generally sought the advice of the recognized elders.

In the immediate family the practice of plural marriage was not uncommon; one man might have more than one wife if he could afford it. As a rule, marriages were formally arranged between the families, with some form of payment -- livestock generally -- going to the bride's parents. This "brideprice" was not meant to indicate that the wife had been bought; rather, it was a means of recompensing the bride's parents for their loss.

In their ways of making a living, as in other aspects of their culture, there were regional variations among the Africans. Dwellers along the shores of the great rivers turned to fishing and boat-making. In the grasslands the economy was primarily pastoral, the chief livestock being goats, sheep, and cattle. Some occupations were widespread, among them the hunting of game and the gathering of beans, nuts, and fruits. Each village had its corps of artisans, often organized into craft guilds. This skilled-labor class embraced pottery makers, weavers, wood carvers, and iron workers.

Most of the people worked in the fields that surrounded their villages, the basic economy being agricultural. Crops were grown on plots of land cleared by fire or by the felling of trees. Securing adequate foodstuffs from the earth was not always easy, but the tillers of the soil had learned such secrets as transplanting. Most of the produce was intended for local consumption, but some of it might be destined for sale outside the village. So important was agriculture as a means of livelihood that private possession of a tract of earth was not permitted. The land was the possession of the collective group; the individual had only the right to its use, owning nothing but the crops he raised.

Like so much else in African life, the land system was tied in with the gods. Among the peoples of the West Coast, religious forces found full and varied outlets. There was a supreme deity and a host of lesser ones, the latter being identified with such natural objects as rivers and the wind. Each god had priests and "diviners" who interpreted his will. The gods did not exhaust the heavenly host; sharing their powers were innumerable spirits, some of them ancestral, but most of them inhabiting the everyday objects of the hut and field.

Filling a definite place in the religious life of the Africans were their art forms, particularly the statuettes and masks of bronze, wood, or ivory that were produced as adjuncts to the performance of religious and magical rites. This wedding of art to experience gave to African sculpture its enduring vitality; the modern critic Alain Locke viewed these carved works as technically so mature and sophisticated that they could be rated as "classic in the best sense of the word." Since art was functional, the urge to express it was deeply ingrained.

Music, too, found universal expression. Among its manifestations were complex compositions for voice, an ear for the subtlest rhythm, and the use of a wide variety of instruments, including the drum, harp, xylophone, violin, guitar, zither, and flute. Like music, the dance was legion, being performed for any number of observances and purposes. Any event worthy of notice was celebrated by rhythmic movement -- births, marriages, or death. Each dance served its own specific purpose; the fertility dance, for example, was, in essence, a prayer that the seed might take good root in the soil and grow well.

The literature produced by the Africans was primarily oral rather than written and can be classified as professional and popular. In the former, knowledge about the history, customs, and traditions of the group was transmitted by men who made a profession of memorizing. The popular literature included tales, proverbs, and riddles passed down from one generation to another, occasionally by trained narrators, but most commonly by amateur storytellers.

In summary, the Negroes who came to the New World varied widely in physical type and ways of life, but there were many common patterns of culture. Whatever the type of state, the varied groups all operated under orderly governments, with established legal codes, and under well-organized social systems. The individual might find it necessary to submerge his will into the collective will, but he shared a deep sense of group identity, a feeling of belonging. And there was ample scope for personal expression -- in crafts, in art, in worship, or in music and the dance.

African societies before the penetration of the Europeans were not backward and static, with their people living in barbarism and savagery. A more accurate view is now being unfolded by modern-day scholars in history, anthropology, archeology, and linguistics. The fruits of their researches show that the peoples of Africa from whom the American Negro is descended have made a rich contribution to the total resources of human culture.

The modern traffic in African slaves began in the mid-fifteenth century, with Portugal taking the lead. In 1441 Prince Henry the Navigator sent one of his mariners, the youthful Antonio Gonsalves, to the West Coast to obtain a cargo of skins and oils. Landing near Cape Bojador, the young captain decided that he might please his sovereign by bringing him gifts. Taking possession of some gold dust and loading ten Africans on his cockleshell, Gonsalves made his way back to Lisbon. Henry was greatly pleased by the gold and the slaves, deeming the latter of sufficient importance to send to the Pope.

In turn, the Pope conferred upon Henry the title to all lands to be discovered to the east of Cape Blanco, a point on the West Coast some 300 miles above the Senegal. Thus began a new era. With renewed vigor Portuguese seamen pressed on with their systematic exploration of the African coastline.

These pioneers found Africa to be a treasure house. It had gold, which, in addition to being valuable in itself, was indispensable as means of paying for the products they wanted from the Orient, India especially. From the West Coast, too, came pepper and elephant tusks, ivory always having a ready market in the commercial centers of the world. But the chief prize of all was the supply of slaves, which, unlike other merchandise, seemed to be inexhaustible. Within two decades after Gonsalves's voyage off Cape Bojador, the slave trade proved to be hig...

1. The Negro in the Making of America Benjamin Quarles