Items related to The Screwtape Letters 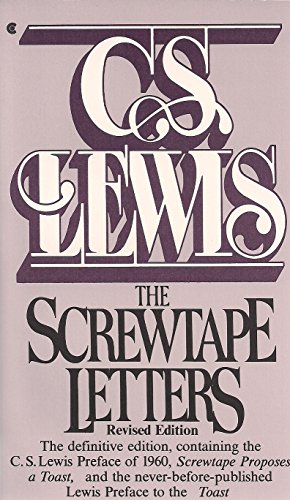 This adaptation of C.S. Lewis's biting satire received a 1999 Grammy nomination for best spoken-word performance, and it's easy to see why--the story fits the format perfectly. It's relatively brief (the unabridged reading takes a mere four hours), and contains only one character--the demon Screwtape, who writes letters to his novice nephew Wormwood, instructing him on how to best tempt his "patient" (a wayward soul on earth) into the bosom of "our Lord below."

Obviously, the book wasn't written with former Monty Python John Cleese in mind, but it's hard to imagine a better Screwtape. Cleese's voice provides the perfect vehicle for Lewis's dry, razor-edged wit. His uncanny comic timing and ability to milk each phrase for maximum effect betray an infectious enthusiasm for the story. It's clear that he's having a great time reading, and it's impossible not to laugh along with him. This inspired pairing of two of the 20th century's greatest wits makes for a meditation on the dark side of spiritual guidance that's as relevant and funny today as it was in Lewis's war-torn England. (Running time: 4 hours, 3 cassettes) --Andrew Neiland

His letters are signed, save one, "Your affectionate uncle", yet Uncle Screwtape's purposes in writing to his young nephew are hardly innocent. Penned in a brisk, businesslike style, old Screwtape offers the gullible Tempter Wormword fiendishly clever advice on his most pressing concern: the winning of young lives to the devil.

First published in 1941, The Screwtape Letters, a perennial best seller, has earned a place in the library of classics. The truths contained in C. S. Lewis's treatise on human nature are as old as the world, but his witty observations continue to confront and challenge believers and nonbelievers alike.

The outcome of Screwtape's correspondence is not known. But judging from his final signoff -- "Your increasingly and ravenously affectionate uncle" -- his appetite for evil has not lessened.