Hortus Third: A Concise Dictionary of Plants Cultivated in the United States and Canada 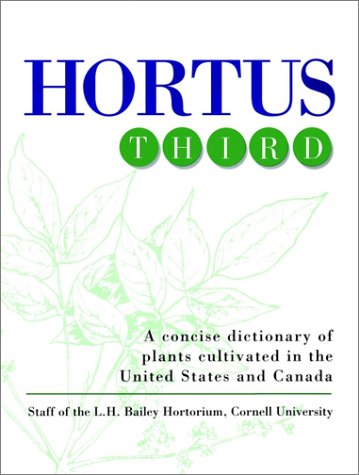 Hortus Third The one essential authoritative reference work to the plants of North American horticulture
* 1,312 pages
* 23,979 entries with description for families, genera, and species
* 10,326 cross-indexed synonyms
* A large but uncounted number of entries for subspecies, varieties, forms, and cultivars
* Notes on use, culture, and propagation
* 187 general articles
* 260 illustrations
* 3,293 authors of botanical names cited
* 1,105 glossary definitions of botanical terms
* 10,408 common names
More than two decades were spent in writing and producing Hortus Third. It is the outgrowth of a program of research in the systematics of cultivated plants, initiated in the late nineteenth century by Liberty Hyde Bailey and continuing today within the framework of his philosophy that knowledge in basic science should be made available to society as a whole. Hortus Third is for advanced horticulturists and others interested in cultivated plants, including horticultural and garden writers, gardeners, nurserymen, landscape architects, botanists, and professional scientists in universities, botanical gardens, extension services, and government.

Hortus Third is a book unique in the field of North American horticultural literature. Written from a botanical point of view for the horticultural community, it is a record of the astonishingly rich and diverse flora of cultivated plants of the United States, Canada, Hawaii, and Puerto Rico. Hortus Third is part of a longstanding program of research, initiated before the turn of the century by Liberty Hyde Bailey, that has given rise to a series of authoritative encyclopedic horticultural works, including Hortus and Hortus Second, published in 1930 and 1941 respectively. Hortus Third continues in the tradition of these publications, but it is much more than a revised or updated version. It is an essentially new work. Obsolete entries of previous editions have been omitted and have been replaced by many more entirely new entries. All other entries, with the exception of a few of the general articles, have been entirely rewritten and expanded to reflect current knowledge of the world's cultivated plants and the conceptual changes that have occurred in systematic botany over the past thirty-five years. The new system of nomenclature for the cultivated variants of species is used. Other innovations include the citation of the author or authors for each botanical name, diagnostic illustrations of representative species of most families, a glossary of botanical terms, and an index to common names. Hortus Third accounts for the botanical names of 34,305 families, genera, and species, and a large but uncounted number of subspecies, varieties, forms, and cultivars. Each entry with a description includes the correct botanical name with its author or authors and, as appropriate, botanical synonyms, common names, indication of nativity, and notes on use, propagation, and culture. Separate articles deal with important crops, such as blueberries; groups of plants—for example, conifers; and methods and materials, such as pruning and soils. As with previous editions, Hortus Third will be for years to come the standard reference to the plants of North American horticulture.

Hortus Third was written by the staff of the Liberty Hyde Bailey Hortorium of Cornell University with the collaboration of a long list of distinguished contributors. The final editing and revisions were the responsibility of the professional staff of the Hortorium, David M. Bates, John W. Incram, Jr., and Harold E. Moore, Jr.

1. Hortus Third: A Concise Dictionary of Plants Cultivated in the United States and Canada

2. Hortus Third: A Concise Dictionary of Plants Cultivated in the United States and Canada

3. Hortus Third: A Concise Dictionary of Plants Cultivated in the United States and Canada

4. Hortus Third: A Concise Dictionary of Plants Cultivated in the United States and Canada