Klein, Melanie Envy And Gratitude And Other Works, 1946-1963 (The Writings of Melanie Klein)

Envy And Gratitude And Other Works, 1946-1963 (The Writings of Melanie Klein) 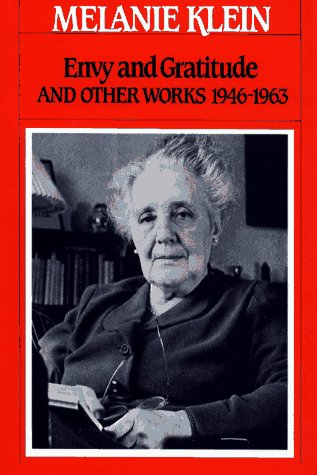 Tavistock Press was established as a co-operative venture between the Tavistock Institute and Routledge & Kegan Paul (RKP) in the 1950s to produce a series of major contributions across the social sciences.
This volume is part of a 2001 reissue of a selection of those important works which have since gone out of print, or are difficult to locate. Published by Routledge, 112 volumes in total are being brought together under the name The International Behavioural and Social Sciences Library: Classics from the Tavistock Press.
Reproduced here in facsimile, this volume was originally published in 1957 and is available individually. The collection is also available in a number of themed mini-sets of between 5 and 13 volumes, or as a complete collection.

Melanie Klein was born in Vienna in 1882, the youngest of four children. At about fourteen she decided to study medicine. With her brother's help she learnt enough Greek and Latin to pass into the Gymnasium but her early engagement and subsequent marriage in 1903 brought a halt to her plans. Years later, discovering a booklet on dreams by Freud, she turned her attentions to psychoanalysis. At this time she was living in Budapest and began her own analysis with Ferenczi, who encouraged her interest in the analysis of children. In 1921 she moved to Berlin to continue her work with children, supported by Dr Karl Abraham, In 1926 she moved to London where she worked and lived until her death in 1960.