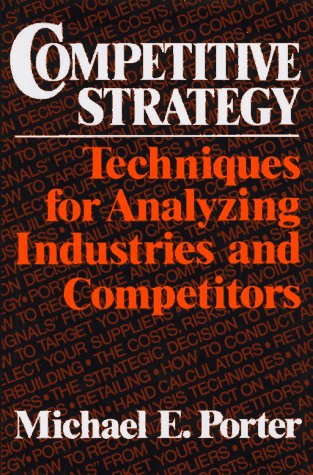 Now nearing its 60th printing in English and translated into nineteen languages, Michael E. Porter's Competitive Strategy has transformed the theory, practice, and teaching of business strategy throughout the world. Electrifying in its simplicity -- like all great breakthroughs -- Porter's analysis of industries captures the complexity of industry competition in five underlying forces. Porter introduces one of the most powerful competitive tools yet developed: his three generic strategies -- lowest cost, differentiation, and focus -- which bring structure to the task of strategic positioning. He shows how competitive advantage can be defined in terms of relative cost and relative prices, thus linking it directly to profitability, and presents a whole new perspective on how profit is created and divided. In the almost two decades since publication, Porter's framework for predicting competitor behavior has transformed the way in which companies look at their rivals and has given rise to the new discipline of competitor assessment.

More than a million managers in both large and small companies, investment analysts, consultants, students, and scholars throughout the world have internalized Porter's ideas and applied them to assess industries, understand competitors,, and choose competitive positions. The ideas in the book address the underlying fundamentals of competition in a way that is independent of the specifics of the ways companies go about competing.

Competitive Strategy has filled a void in management thinking. It provides an enduring foundation and grounding point on which all subsequent work can be built. By bringing a disciplined structure to the question of how firms achieve superior profitability, Porter's rich frameworks and deep insights comprise a sophisticated view of competition unsurpassed in the last quarter-century.

Michael E. Porter, one of the world's leading authorities on competitive strategy and international competitiveness, is the C. Roland Christensen Professor of Business Administration at the Harvard Business School. In 1983, Professor Porter was appointed to President Reagan's Commission on Industrial Competitiveness, the initiative that triggered the competitiveness debate in America. He serves as an advisor to heads of state, governors, mayors, and CEOs throughout the world. The recipient of the Wells Prize in Economics, the Adam Smith Award, three McKinsey Awards, and honorary doctorates from the Stockholm School of Economics and six other universities, Porter is the author of fourteen books, among them Competitive Strategy, The Competitive Advantage of Nations, and Cases in Competitive Strategy, all published by The Free Press. He lives in Brookline, Massachusetts.

Chapter 1: The Structural Analysis of Industries

The essence of formulating competitive strategy is relating a company to its environment. Although the relevant environment is very broad, encompassing social as well as economic forces, the key aspect of the firm's environment is the industry or industries in which it competes. Industry structure has a strong influence in determining the competitive rules of the game as well as the strategies potentially available to the firm. Forces outside the industry are significant primarily in a relative sense; since outside forces usually affect all firms in the industry, the key is found in the differing abilities of firms to deal with them.

The intensity of competition in an industry is neither a matter of coincidence nor bad luck. Rather, competition in an industry is rooted in its underlying economic structure and goes well beyond the behavior of current competitors. The state of competition in an industry depends on five basic competitive forces. The collective strength of these forces determines the ultimate profit potential in the industry, where profit potential is measured in terms of long run return on invested capital. Not all industries have the same potential. They differ fundamentally in their ultimate profit potential as the collective strength of the forces differs; the forces range from intense in industries like tires, paper, and steel -- where no firm earns spectacular returns -- to relatively mild in industries like oil-field equipment and services, cosmetics, and toiletries -- where high returns are quite common.

This chapter will be concerned with identifying the key structural features of industries that determine the strength of the competitive forces and hence industry profitability. The goal of competitive strategy for a business unit in an industry is to find a position in the industry where the company can best defend itself against these competitive forces or can influence them in its favor. Since the collective strength of the forces may well be painfully apparent to all competitors, the key for developing strategy is to delve below the surface and analyze the sources of each. Knowledge of these underlying sources of competitive pressure highlights the critical strengths and weaknesses of the company, animates its positioning in its industry, clarifies the areas where strategic changes may yield the greatest payoff, and highlights the areas where industry trends promise to hold the greatest significance as either opportunities or threats. Understanding these sources will also prove to be useful in considering areas for diversification, though the primary focus here is on strategy in individual industries. Structural analysis is the fundamental underpinning for formulating competitive strategy and a key building block for most of the concepts in this book.

To avoid needless repetition, the term "product" rather than "product or service" will be used to refer to the output of an industry, even though the principles of structural analysis developed here apply equally to product and service businesses. Structural analysis also applies to diagnosing industry competition in any country or in an international market, though some of the institutional circumstances may differ.

Structural Determinants of the Intensity of Competition

Let us adopt the working definition of an industry as the group of firms producing products that are close substitutes for each other. In practice there is often a great deal of controversy over the appropriate definition, centering around how close substitutability needs to be in terms of product, process, or geographic market boundaries. Because we will be in a better position to treat these issues once the basic concept of structural analysis has been introduced, we will assume initially that industry boundaries have already been drawn.

Competition in an industry continually works to drive down the rate of return on invested capital toward the competitive floor rate of return, or the return that would be earned by the economist's "perfectly competitive" industry. This competitive floor, or "free market" return, is approximated by the yield on long-term government securities adjusted upward by the risk of capital loss. Investors will not tolerate returns below this rate in the long run because of their alternative of investing in other industries, and firms habitually earning less than this return will eventually go out of business. The presence of rates of return higher than the adjusted free market return serves to stimulate the inflow of capital into an industry either through new entry or through additional investment by existing competitors. The strength of the competitive forces in an industry determines the degree to which this inflow of investment occurs and drives the return to the free market level, and thus the ability of firms to sustain above-average returns.

The five competitive forces -- entry, threat of substitution, bargaining power of buyers, bargaining power of suppliers, and rivalry among current competitors -- reflect the fact that competition in an industry goes well beyond the established players. Customers, suppliers, substitutes, and potential entrants are all "competitors" to firms in the industry and may be more or less prominent depending on the particular circumstances. Competition in this broader sense might be termed extended rivalry.

All five competitive forces jointly determine the intensity of industry competition and profitability, and the strongest force or forces are governing and become crucial from the point of view of strategy formulation. For example, even a company with a very strong market position in an industry where potential entrants are no threat will earn low returns if it faces a superior, lower-cost substitute. Even with no substitutes and blocked entry, intense rivalry among existing competitors will limit potential returns. The extreme case of competitive intensity is the economist's perfectly competitive industry, where entry is free, existing firms have no bargaining power against suppliers and customers, and rivalry is unbridled because the numerous firms and products are all alike.

Different forces take on prominence, of course, in shaping competition in each industry. In the ocean-going tanker industry the key force is probably the buyers (the major oil companies), whereas in tires it is powerful original equipment (OEM) buyers coupled with tough competitors. In the steel industry the key forces are foreign competitors and substitute materials.

The underlying structure of an industry, reflected in the strength of the forces, should be distinguished from the many short-run factors that can affect competition and profitability in a transient way. For example, fluctuations in economic conditions over the business cycle influence the short-run profitability of nearly all firms in many industries, as can material shortages, strikes, spurts in demand, and the like. Although such factors may have tactical significance, the focus of the analysis of industry structure, or "structural analysis," is on identifying the basic, underlying characteristics of an industry rooted in its economics and technology that shape the arena in which competitive strategy must be set. Firms will each have unique strengths and weaknesses in dealing with industry structure, and industry structure can and does shift gradually over time. Yet understanding industry structure must be the starting point for strategic analysis.

A number of important economic and technical characteristics of an industry are critical to the strength of each competitive force. These will be discussed in turn.

New entrants to an industry bring new capacity, the desire to gain market share, and often substantial resources. Prices can be bid down or incumbents' costs inflated as a result, reducing profitability. Companies diversifying through acquisition into the industry from other markets often use their resources to cause a shake-up, as Philip Morris did with Miller beer. Thus acquisition into an industry with intent to build market position should probably be viewed as entry even though no entirely new entity is created.

There are six major sources of barriers to entry:

Economies of Scale. Economies of scale refer to declines in unit costs of a product (or operation or function that goes into producing a product) as the absolute volume per period increases. Economies of scale deter entry by forcing the entrant to come in at large scale and risk strong reaction from existing firms or come in at a small scale and accept a cost disadvantage, both undesirable options. Scale economies can be present in nearly every function of a business, including manufacturing, purchasing, research and development, marketing, service network, sales force utilization, and distribution. For example, scale economies in production, research, marketing, and service are probably the key barriers to entry in the mainframe computer industry, as Xerox and General Electric sadly discovered.

Scale economies may relate to an entire functional area, as in the case of a sales force, or they may stem from particular operations or activities that are part of a functional area. For example, in the manufacture of television sets, economies of scale are large in color tube production, and they are less significant in cabinetmaking and set assembly. It is important to examine each component of costs separately for its particular relationship between unit cost and scale.

Units of multibusiness firms may be able to reap economies similar to those of scale if they are able to share operations or functions<...