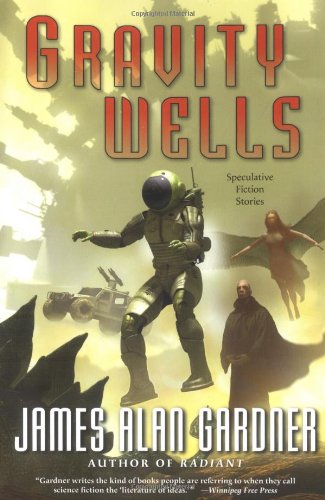 A debut collection of short fiction by the award-winning author of Radiant features fourteen tales of speculative fiction that explore topics ranging from the unknown mystery of everyday experience to the secrets of the cosmos, from peanut butter sandwiches to space drives. Original. 20,000 first printing.

James Alan Gardner is a 1989 graduate of the Clarion West Science Fiction Writers Workshop, and has had several science fiction stories and novellas appear in publications such as Isaac Asimov's Science Fiction Magazine, Amazing Stories, and The Magazine of Fantasy and Science Fiction. He is the author of six previous novels: Expendable, Commitment Hour, Vigilant, Hunted, Ascending, and Trapped. He was the grand prize winner of the 1989 Writers of the Future contest, has won the Aurora Award, and has been nominated for the Hugo and Nebula Awards. He lives in Canada.

American SF buffs will welcome Canadian author Gardner's highly intelligent first story collection. "Muffin Explains Teleology to the World at Large," which won the Aurora Award, is as witty as the title implies. "Kent State Descending the Gravity Well: An Analysis of the Observer" deals provocatively with the media's distortion of history, even for eyewitnesses. The large cast of "The Last Day of the War, with Parrots," set in the League of Worlds, at times slows the pace, but not at the cost of vivid characterization. "Hardware Scenario G-49," written for the Clarion Workshop, manages to convey an intense emotional impact almost without action. The quasi-fantastic "Three Hearings on the Existence of Snakes in the Human Bloodstream" explores a crisis of faith arising from the invention of the microscope and the scientific and medical progress it made possible. "Sense of Wonder" is a good example of that difficult form, a story entirely in dialogue. Like the author's most recent novel, Radiant, these speculative tales can be heavy going, but they're all absorbing. Agent, Richard Curtis. (May 10)
Copyright © Reed Business Information, a division of Reed Elsevier Inc. All rights reserved.