Items related to The Coming of the Kid: A Novel

Hall, Oakley The Coming of the Kid: A Novel

The Coming of the Kid: A Novel 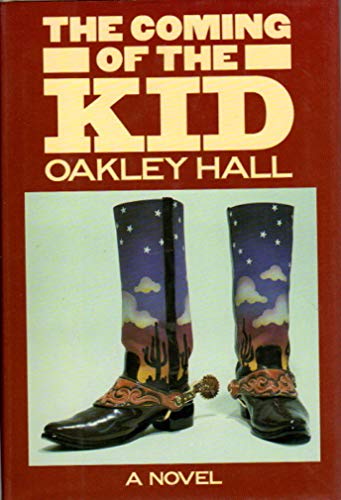 A lush who talks to horses, a dwarf with a traveling pharmacy, a world-weary grizzly named Duke, and hordes of uncanny riders make up the supporting cast of this satiric fable about the advent of the Kid, summoned to battle Evil in the Old West

The Territory has long been devastated by drought and plagued by an outlaw gang led by the malevolent Big Mac. But a savior has been foretold (The Kid) who will rid the Territory of its desperadoes, end its drought, and bring back its lost Edenic lushness. So it has been foretold and so it comes about, but not before some precursors of the one true Kid have come and failed. The real interest here is not how the Kid saves all but how Hall spoofs practically every cliche common to the Western, including the narrative voices most often used to tell them. This is a sprightly romp through the legends of the Old West but its sharpest and subtlest satire is aimed at the modern West, where conglomerates (Big Mac) are tearing up the land beyond the power of any hero to restore. Charles Michaud, Turner Free Lib., Randolph, Mass.
Copyright 1985 Reed Business Information, Inc.

3. The Coming of the Kid: A Novel Hall, Oakley