Items related to Pigs in Heaven 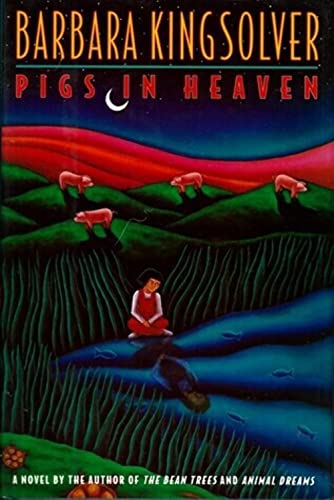 When Turtle witnesses a freak accident at the Hoover Dam, her mother responds and a man's life is saved, but their lives are changed by the incident

When six-year-old Turtle Greer witnesses a freak accident at the Hoover Dam, her insistence on what she has seen and her mother's belief in her lead to a man's dramatic rescue. But Turtle's moment of celebrity draws her into a conflict of historic proportions. The crisis quickly envelops not only Turtle and her mother, Taylor, but everyone else who touches their lives in a complex web connecting their future with their past.

Pigs in Heaven travels the roads from rural Kentucky and the urban Southwest to Heaven, Oklahoma, and the Cherokee Nation as it draws the reader into a world of heartbreak and redeeming love, testing the boundaries of family and the many separate truths about the ties that bind.

Barbara Kingsolver's work has been translated into more than twenty languages and has earned a devoted readership at home and abroad. She was awarded the National Humanities Medal, our country's highest honor for service through the arts. She received the 2011 Dayton Literary Peace Prize for the body of her work, and in 2010 won Britain's Orange Prize for The Lacuna. Before she made her living as a writer, Kingsolver earned degrees in biology and worked as a scientist. She now lives with her family on a farm in southern Appalachia.

Book Description Condition: New. When Turtle witnesses a freak accident at the Hoover Dam, her mother responds and a man's life is saved, but their lives are changed by the incident. By the author of Animal Dreams. 100,000 first printing. $125,000 ad/promo. Tour. Seller Inventory # 9780060168018