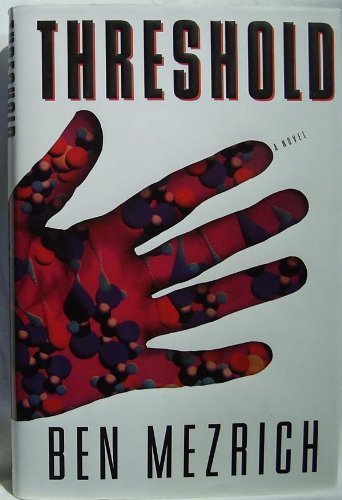 A science thriller, Threshold features a face-off between Dr. Jason Waters, the founder of the DNA-researching Tucsome Project, and Jeremy Ross, a young and brilliant Ph.D. Their scientific and investigative paths cross when Secretary of Defense Warren T. Walker is found dead with gouge wounds to his face, apparently by his own hand. When Ross, working with the CIA, discovers that Waters has pilfered $60 billion to unlock the source of DNA coding, a showdown ensues that leads to an explosive climax.

Twenty-seven-year-old Mezrich makes a bid for Grisham-level success with this flimsy thriller featuring a mad scientist bent on creating a master race--though cardboard characters and a predictable plot keep getting in his way. Jeremy Ross is happily immersed in the chaotic life of a fourth-year medical student at New York City Hospital on the night that Robin Kelly, a former girlfriend when the two were at Dartmouth, drops into the emergency room to ask for his help. Robin--tearful, terrified, yet lovely as ever--confides to Jeremy her suspicion that the recent death of her father, Secretary of Defense Warren T. Walker, was the result of foul play. She wants Jeremy to steal a copy of her father's death certificate and tell her what he thinks. Dazzled by Robin's beauty, the 24-year-old genetics enthusiast performs as asked--and what he finds makes him wonder whether someone could have introduced a deadly virus into Walker's cells. Jeremy's concern--along with evidence that Robin is indeed being threatened with murder--leads him to the Tucsome Project for Genetic Research, a facility funded largely by the Defense Department, and one that Walker was known to have visited. Enlisting as an intern at the Project, Jeremy investigates the recent death of a researcher with whom Walker had had contact; snoops into the secret activities of charismatic lab director and genetics genius Jason Waters; and wonders about the horrifically disabled children under study at the facility's adjoining hospital. It's hardly surprising that Walker's death turns out to have been genetically engineered--but the murder of a government official is only the tip of the iceberg here, as Jeremy learns while fighting his own nightmares and trying to protect his former love. TV-level melodrama on a big-screen budget. (First printing of 100,000; $100,000 ad/promo; author tour) -- Copyright ©1996, Kirkus Associates, LP. All rights reserved.