Items related to April 1865: The Month That Saved America

April 1865: The Month That Saved America 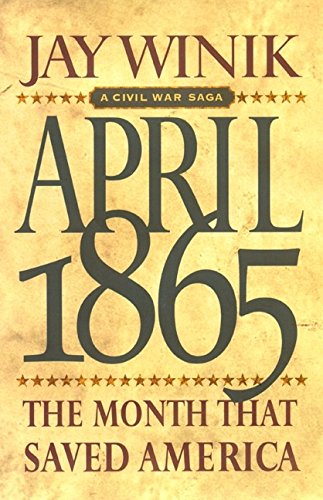 April 1865 was a month that could have unraveled the nation. Instead, it saved it. Here Jay Winik offers a brilliant new look at the Civil War's final days that will forever change the way we see the war's end and the nation's new beginning. Uniquely set within the larger sweep of history, filled with rich profiles of outsize figures, fresh iconoclastic scholarship, and a gripping narrative, this is a masterful account of the thirty most pivotal days in the life of the United States.

It was not inevitable that the Civil War would end as it did, or that it would end at all well. Indeed, it almost didn't. Time and again, critical moments could have plunged the nation back into war or fashioned a far harsher, more violent, and volatile peace. Now, in a superbly told story, Winik captures the epic images and extraordinary history as never before. This one month witnessed the frenzied fall of Richmond; a daring last-ditch Southern plan for guerrilla warfare; Lee's harrowing retreat; and then Appomattox. It saw Lincoln's assassination just five days later, and a near-successful plot to decapitate the Union government, followed by chaos and coup fears in the North, collapsed negotiations and continued bloodshed in the South, and finally, the start of national reconciliation. In the end, April 1865 emerges as not just the tale of the war's denouement, but the story of the making of our nation.

Provocative, bold, exquisitely rendered, and stunningly original, April 1865 is the first major reassessment of the Civil War's close and is destined to become one of the great stories of American history.

There are a few books that belong on the shelf of every Civil War buff: James M. McPherson's Battle Cry of Freedom, one of the better Abraham Lincoln biographies, something on Robert E. Lee, perhaps Shelby Foote's massive trilogy The Civil War. Add Jay Winik's wonderful April 1865 to the list. This is one of those rare, shining books that takes a new look at an old subject and changes the way we think about it. Winik shows that there was nothing inevitable about the end of the Civil War, from the fall of Richmond to the surrender at Appomattox to the murder of Lincoln. It all happened so quickly, in what "proved to be perhaps the most moving and decisive month not simply of the Civil War, but indeed, quite likely, in the life of the United States."

Things might have been rather different, too. "What emerges from the panorama of April 1865 is that the whole of our national history could have been altered but for a few decisions, a quirk of fate, a sudden shift in luck." When Lee abandoned Richmond, for instance, his soldiers rendezvoused at a nearby town called Amelia Court House. There, the general expected to find boxcars full of food for his hungry troops. But "a mere administrative mix-up" left his army empty-handed and may have limited Lee's options in the days to come. Or what if Lee had decided not to surrender at all, but to turn his resourceful army into an outfit of guerrilla fighters who would harass federal officials? National reconciliation might have become impossible as the whole South turned into a region plagued with violence and terrorism. For the Union, "there would be no real rest, no real respite, no true amity, nor, for that matter, any real sense of victory--only an amorphous state of neither war nor peace, raging like a low-level fever." One of Lee's officers actually proposed this scenario to his commander in those final hours; America is fortunate Lee didn't choose this path.

Winik is an exceptionally good storyteller. April 1865 is full of memorable images and you-are-there writing. Readers will come away with a new appreciation for that momentous month and a sharpened understanding of why and how the Civil War was fought. Let it be said plainly: April 1865 is a magnificent work, surely the best book on the Civil War to be published in some time. --John J. Miller

Jay Winik is the author of the New York Times bestseller April 1865. He is a senior scholar of history and public policy at the University of Maryland and a regular contributor to The Wall Street Journal and The New York Times. He lives in Chevy Chase, Maryland.