Items related to The Years of Extermination: Nazi Germany and the Jews,...

Friedlander, Saul The Years of Extermination: Nazi Germany and the Jews, 1939-1945 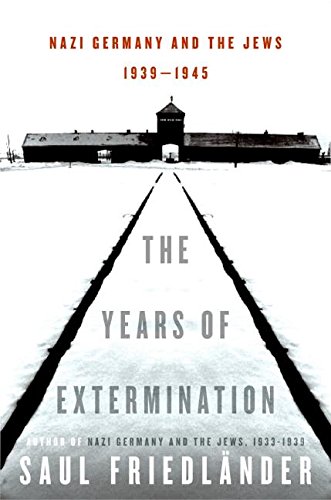 With The Years of Extermination, Saul Friedländer completes his major historical work on Nazi Germany and the Jews. The book describes and interprets the persecution and murder of the Jews throughout occupied Europe. The enactment of German extermination policies and measures depended on the cooperation of local authorities, the assistance of police forces, and the passivity of the populations, primarily of their political and spiritual elites. This implementation depended as well on the victims’ readiness to submit to orders, often with the hope of attenuating them or of surviving long enough to escape the German vise.

This multifaceted study—at all levels and in different places—enhances the perception of the magnitude, complexity, and interrelatedness of the many components of this history. Based on a vast array of documents and an overwhelming choir of voices—mainly from diaries, letters, and memoirs—Saul Friedländer avoids domesticating the memory of these unprecedented and horrific events. The convergence of these various aspects gives a unique quality to The Years of Extermination. In this work, the history of the Holocaust has found its definitive representation.

Born in Prague, Saul Friedländer spent his boyhood in Nazi-occupied France. He is a professor of history at UCLA, and has written numerous books on Nazi Germany and World War II.

Saul Friedländer, born in 1932, has now finished his magnum opus, the second volume of his history of Nazi Germany and the Jews (the first, covering the years 1933-1939, appeared in 1997). The Years of Extermination may prove to be the last major general history of the Holocaust produced by a leading scholar who lived under the Nazis. For this reason, and because it relies heavily on the findings and perspectives of recent scholarship, it presents a kind of appraisal of our understanding of the period.

Friedländer brings together a vast array of evidence -- including the Nazi leadership's public and private pronouncements, the testimony of bystanders and the testimony of victims -- to ground his basic contentions about two principal concerns: how the decisions about the persecution of the Jews unfolded, and how Germans and other Europeans reacted to that persecution. He does this through a detailed chronological recounting of the events, in which he follows the thread of the regime's anti-Jewish initiatives while repeatedly cutting to different European countries for snapshots of their implementation.

The evidence is overwhelming, Friedländer shows, that anti-Semitism not only motivated Hitler and the Nazi leadership in their persecution and extermination of the Jews, but that it led Germans to accept and implement the regime's policies, and most of the peoples of occupied Europe to aid or watch, with little sympathy, the destruction of the Jews among them. Until a decade ago this was generally denied by scholars, who, focusing almost exclusively on the Nazi leadership and enamored of misleading structural and social psychological theories, ignored the evidence from victims and perpetrators alike about the pervasiveness of anti-Semitism.

Friedländer confirms that, while the Nazi leadership and many Germans wanted desperately to rid their country and Europe of Jews, actual anti-Jewish policy moved forward in a pragmatic, not entirely linear way -- from ghettoization and expulsion schemes to regional killing to total annihilation. After all, the Germans' assault on the Jews encompassed a continent and evolved in the context of changing military, political and economic constraints and opportunities.

He also leaves no doubt that it is transparent nonsense to exculpate ordinary Germans involved in the persecution, as well as the conquered peoples of Europe who aided the Germans, with claims that they did not know of the mass murder or were terrorized into compliance by the Nazis. Following a growing trend, he rejects the convention of referring to the German perpetrators as "Nazis," which many of the Germans were not, and calls them instead "Germans."

Approval of the mass murder was indeed widespread in Germany and across Europe. But what was singular, which Friedländer does not sufficiently emphasize or analyze, is that the project was ideologically driven forward from Germany by Germans who alone sought the total elimination of the Jews from Europe and ultimately from the world. Whatever substantial local aid Germans received from Dutch, French, Poles, Ukrainians and others, it was principally Germans who imagined a world without Jews.

For all the book's virtues, Friedländer's failure to explore this and other critical themes makes The Years of Extermination little more than a dressed-up chronicle. Covering an entire continent's record of persecution inevitably yields superficial treatments and omissions. Still, he does not include, aside from the Nazi leadership, this genocide's central actors -- the actual killers themselves -- let alone examine them, their motives and deeds in depth. This astonishing omission compromises his overall project.

The central idea of his first volume, "redemptive anti-Semitism" -- that anti-Semitism is a quasi-religious belief system that offers to redeem the world of its troubles -- barely appears here. In that earlier work, he also explicitly rejected the conception of Hitler's and other Germans' anti-Semitism as "eliminationist" -- that anti-Semites believed Jews posed such a threat that they had to be eliminated somehow, whether by ghettoization, deportation or annihilation. Yet in this volume, without comment, Friedländer redefines redemptive anti-Semitism as a mission to save the world precisely "by eliminating the Jews." That may be because his earlier, woolly concept is useless when considering the central analytical problem of this book, the relationship between anti-Jewish prejudice and anti-Jewish action. After all, many anti-Semites who did not seek world redemption willingly took part in the expulsion and mass murder of Jews. Now that Friedländer must deal with actual eliminationist policies as his main subject, he alters his earlier concept and then drops it after the introduction, leaving his book analytically disarmed.

Friedländer repeatedly fails to explore the larger significance of the many events he describes, such as the relationship among the Germans' various plans to deport Jews, to slaughter "only" the adult Jewish males in one region, and to annihilate them totally. And he fails to place the Germans' and other Europeans' extermination of the Jews in any broader context, including the Germans' large-scale but systematically different brutalizing and killing of non-Jews.

Friedländer's book offers a useful, updated panorama of the events of the Holocaust. But readers seeking more than an introductory narrative will have to look elsewhere.