Items related to Daughter of Fortune: A Novel

Daughter of Fortune: A Novel 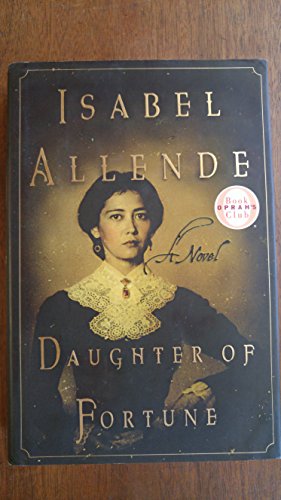 Orphaned at birth, Eliza Sommers is raised in the British colony of Valparaíso, Chile, by the well-intentioned Victorian spinster Miss Rose and her more rigid brother Jeremy. Just as she meets and falls in love with the wildly inappropriate Joaquín Andieta, a lowly clerk who works for Jeremy, gold is discovered in the hills of northern California. By 1849, Chileans of every stripe have fallen prey to feverish dreams of wealth. Joaquín takes off for San Francisco to seek his fortune, and Eliza, pregnant with his child, decides to follow him.

So begins Isabel Allende's enchanting new novel, Daughter of Fortune, her most ambitious work of fiction yet. As we follow her spirited heroine on a perilous journey north in the hold of a ship to the rough-and-tumble world of San Francisco and northern California, we enter a world whose newly arrived inhabitants are driven mad by gold fever. A society of single men and prostitutes among whom Eliza moves--with the help of her good friend and savior, the Chinese doctor Tao Chien--California opens the door to a new life of freedom and independence for the young Chilean. Her search for the elusive Joaquín gradually turns into another kind of journey that transforms her over time, and what began as a search for love ends up as the conquest of personal freedom. By the time she finally hears news of him, Eliza must decide who her true love really is.

Daughter of Fortune is a sweeping portrait of an era, a story rich in character, history, violence, and compassion. In Eliza, Allende has created one of her most appealing heroines, an adventurous, independent-minded, and highly unconventional young woman who has the courage to reinvent herself and to create her own destiny in a new country. A marvel of storytelling, Daughter of Fortune confirms once again Isabel Allende's extraordinary gift for fiction and her place as one of the world's leading writers.

Oprah Book Club® Selection, February 2000: Until Isabel Allende burst onto the scene with her 1985 debut, The House of the Spirits, Latin American fiction was, for the most part, a boys' club comprising such heavy hitters as Gabriel García Márquez, Jorge Luis Borges, and Mario Vargas Llosa. But the Chilean Allende shouldered her way in with her magical realist multi-generational tale of the Trueba family, followed it up with four more novels and a spate of nonfiction, and has remained in a place of honor ever since. Her sixth work of fiction, Daughter of Fortune, shares some characteristics with her earlier works: the canvas is wide, the characters are multi-generational and multi-ethnic, and the protagonist is an unconventional woman who overcomes enormous obstacles to make her way in the world. Yet one cannot accuse Allende of telling the same story twice; set in the mid-1800s, this novel follows the fortunes of Eliza Sommers, Chilean by birth but adopted by a British spinster, Rose Sommers, and her bachelor brother, Jeremy, after she is abandoned on their doorstep.

"You have English blood, like us," Miss Rose assured Eliza when she was old enough to understand. "Only someone from the British colony would have thought to leave you in a basket on the doorstep of the British Import and Export Company, Limited. I am sure they knew how good-hearted my brother Jeremy is, and felt sure he would take you in. In those days I was longing to have a child, and you fell into my arms, sent by God to be brought up in the solid principles of the Protestant faith and the English language."

The family servant, Mama Fresia, has a different point of view, however: "You, English? Don't get any ideas, child. You have Indian hair, like mine." And certainly Eliza's almost mystical ability to recall all the events of her life would seem to stem more from the Indian than the Protestant side.

As Eliza grows up, she becomes less tractable, and when she falls in love with Joachin Andieta, a clerk in Jeremy's firm, her adoptive family is horrified. They are even more so when a now-pregnant Eliza follows her lover to California where he has gone to make his fortune in the 1849 gold rush. Along the way Eliza meets Tao Chi'en, a Chinese doctor who saves her life and becomes her closest friend. What starts out as a search for a lost love becomes, over time, the discovery of self; and by the time Eliza finally catches up with the elusive Joachin, she is no longer sure she still wants what she once wished for. Allende peoples her novel with a host of colorful secondary characters. She even takes the narrative as far afield as China, providing an intimate portrait of Tao Chi'en's past before returning to 19th-century San Francisco, where he and Eliza eventually fetch up. Readers with a taste for the epic, the picaresque, and romance that is satisfyingly complex will find them all in Daughter of Fortune. --Margaret Prior

Isabel Allende is the author of twelve works of fiction, including the New York Times bestsellers Maya’s Notebook, Island Beneath the Sea, Inés of My Soul, Daughter of Fortune, and a novel that has become a world-renowned classic, The House of the Spirits. Born in Peru and raised in Chile, she lives in California.

1. Daughter of Fortune: A Novel

2. Daughter of Fortune: A Novel

3. Daughter of Fortune: A Novel

5. Daughter of Fortune: A Novel

Book Description Condition: New. Quality Books. Because We Care - Shipped from Canada. Usually ships within 1-2 business days. If you buy this book from us, we will donate a book to a local school. We donate 10,000+ books to local schools every year. Seller Inventory # R08306C

7. Daughter of Fortune: A Novel

Book Description Condition: New. A Chilean woman searches for her lover in the goldfields of 1840s California. Arriving as a stowaway, Eliza finances her search with various jobs, including playing the piano in a brothel. Seller Inventory # 9780060194918

9. Daughter of Fortune: A Novel

10. Daughter of Fortune: A Novel