Items related to Stalin's Last Crime: The Plot Against the Jewish... 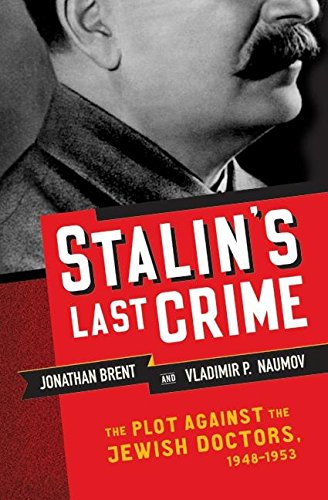 On January 13, 1953, a stunned world learned that a vast conspiracy had been unmasked among Jewish doctors in the USSR to murder Kremlin leaders. Mass arrests quickly followed. The Doctors' Plot, as this alleged scheme came to be called, was Stalin's last crime.

In the fifty years since Stalin's death many myths have grown up about the Doctors' Plot. Did Stalin himself invent the conspiracy against the Jewish doctors or was it engineered by subordinates who wished to eliminate Kremlin rivals? Did Stalin intend a purge of all Jews from Moscow, Leningrad, and other major cities, which might lead to a Soviet Holocaust? How was this plot related to the cold war then dividing Europe, and the hot war in Korea? Finally, was the Doctors' Plot connected with Stalin's fortuitous death?

Brent and Naumov have explored an astounding arra of previously unknown, top-secret documents from the KGB, the presidential archives, and other state and party archives in order to probe the mechanism of on of Stalin's greatest intrigues -- and to tell for the first time the incredible full story of the Doctors' Plot.

Jonathan Brent, editorial director of Yale University Press and founder of its distinguished Annals of Communism series, holds a Ph.D. from the University of Chicago and is writing a biography of the Soviet Jewish writer Isaac Babel.

Vladimir P. Naumov, a professor of history, has been executive secretary of the Presidential Commission for the Rehabilitation of Repressed Persons in Moscow since its inception under former president Mikhail Gorbachev.

Though the Great Terror of the late 1930s is widely viewed as the height of Stalin's purges, the number of arrests actually peaked in the early 1950s, and Stalin was planning hundreds of thousands more on the eve of his death in 1953. These arrests were spurred by the "doctors' plot," a supposed conspiracy among Jewish doctors to kill members of the government and destroy the U.S.S.R. at the behest of the Americans. Brent, the editorial director of Yale University Press, and Naumov, executive secretary of Russia's Presidential Commission for the Rehabilitation of Repressed Persons, trace how Stalin himself put together false evidence of the "doctors' plot," which was far more than a simple exercise in anti-Semitism and paranoid senility. According to the authors, Stalin intended to use the "doctors' plot" to accomplish several goals: to purge his Ministry of Security and upper ranks of government; to defuse the potential threat posed by Soviet Jews, many of whom had ties to the U.S. and the new state of Israel; and to provide fuel for an armed conflict with the U.S. Brent and Naumov provide a riveting view of Stalin's modus operandi: over the course of several years, he patiently and meticulously gathered forced confessions that would weave together unrelated events-the death of a top Party official here, the arrest of a Zionist doctor there-into a story of massive conspiracy. One of the reasons for his great care, the book contends, is that the popular mood had subtly shifted in the postwar era; revolutionary fervor had died down, there was a desire for legal legitimacy and, in contrast to their 1930s counterparts, top bureaucrats were loath to convict without evidence. One wishes that the authors had elaborated on fascinating points like these. Their narrative is a complicated one, full of minor characters and bureaucratic missives, and, by necessity, most of this narrowly focused book is taken up with close readings of documents.
Copyright 2003 Reed Business Information, Inc.

Book Description HarperCollins, Scranton, Pennsylvania, U.S.A., 2003. Hardcover. Condition: New. Dust Jacket Condition: New. First Edition. In January, 1953 Pravda reported a vast conspiracy by Jewish doctors to murder the leaders of the Soviet Union. The charges against doctors who had long served the Soviet state were obviously bogus. Coming so soon after the end of the Third Reich this Soviet replication of Nazi anti-semitism astonished the world. This book is a detailed look at how Stalin developed his plan to purge Jews from all positions of power in the USSR. It also examines the role of Stalin's anti-Jewish campaign in preparing the USSR for confrontation with the United States. Much new information based on declassified Soviet files. xi+399 pages. Seller Inventory # 14616