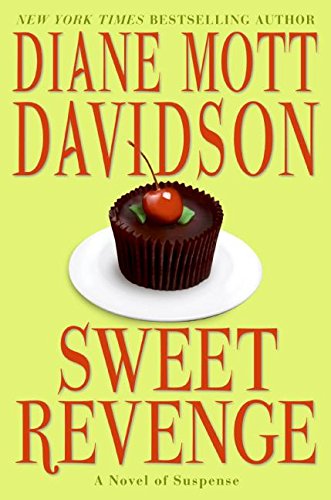 Goldy Schulz is thrilled to be catering a holiday breakfast feast for the staff of the Aspen Meadow Library. But little does she know that on the menu, alongside the Great Expectations Grapefruit, Chuzzlewit Cheese Pie, and Bleak House Bars, is a large helping of murder.

While setting up at the library, Goldy spots a woman lurking in the stacks who bears a striking resemblance to Sandee Brisbane—the Sandee Brisbane who killed Goldy's ex-husband, the Jerk. But Sandee is supposed to be dead. Or so everyone believes.

Goldy's suspicions mount when the body of Drew Wellington, a former district attorney, is found in a corner of the library with a map worth thousands of dollars stashed in his clothing. She's convinced that Sandee is involved.

But the holiday madness is only just beginning for Goldy. Soon she's drawn into the dangerous, double-crossing world of high-end map dealing. And like the ghost of Christmas past, Sandee keeps making an appearance. Could she be out to prove that revenge is sweet?

Diane Mott Davidson is the author of seventeen bestselling novels. She divides her time between Colorado and Florida.

Starred Review. Bestseller Davidson is at the top of her form in her 14th culinary suspense novel to feature Colorado crime-solving caterer Goldy Schulz (after 2006's Dark Tort). As the Christmas season approaches, Goldy is thrilled to be catering not only a breakfast for the local library but also an elegant dinner for Hermie and Smithfield MacArthur, rich Southern transplants to Aspen Meadow. But when the body of Drew Wellington, the disgraced former DA, turns up in the library, Goldy is once again forced to put her recipes on the back burner and find the murderer. Discovering that Wellington was dabbling in antique map collecting, Goldy must track down a priceless map and steer clear of Wellington's fellow collectors, ex-girlfriends and clients. Further complicating matters are sightings of the allegedly deceased Sandee Brisbane, the young woman accused of murdering Goldy's ex-husband and then supposedly perishing in a forest fire. Readers will happily sink their teeth into Goldy's latest case and come away hungry for more. 11-city author tour.
Copyright © Reed Business Information, a division of Reed Elsevier Inc. All rights reserved.