Items related to The Graveyard Book 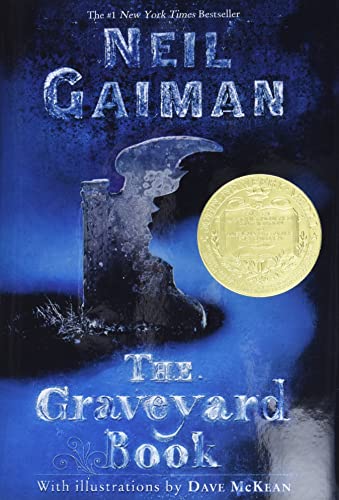 The original hardcover edition of a perennial favorite, The Graveyard Book by Neil Gaiman, which has sold more than one million copies and is the only novel to win both the Newbery Medal and the Carnegie Medal.

Bod is an unusual boy who inhabits an unusual place—he's the only living resident of a graveyard. Raised from infancy by the ghosts, werewolves, and other cemetery denizens, Bod has learned the antiquated customs of his guardians' time as well as their ghostly teachings—such as the ability to Fade so mere mortals cannot see him.

Can a boy raised by ghosts face the wonders and terrors of the worlds of both the living and the dead?

In The Graveyard Book, Neil Gaiman has created a charming allegory of childhood. Although the book opens with a scary scene--a family is stabbed to death by "a man named Jack” --the story quickly moves into more child-friendly storytelling. The sole survivor of the attack--an 18-month-old baby--escapes his crib and his house, and toddles to a nearby graveyard. Quickly recognizing that the baby is orphaned, the graveyard's ghostly residents adopt him, name him Nobody ("Bod"), and allow him to live in their tomb. Taking inspiration from Kipling’s The Jungle Book, Gaiman describes how the toddler navigates among the headstones, asking a lot of questions and picking up the tricks of the living and the dead. In serial-like episodes, the story follows Bod's progress as he grows from baby to teen, learning life’s lessons amid a cadre of the long-dead, ghouls, witches, intermittent human interlopers. A pallid, nocturnal guardian named Silas ensures that Bod receives food, books, and anything else he might need from the human world. Whenever the boy strays from his usual play among the headstones, he finds new dangers, learns his limitations and strengths, and acquires the skills he needs to survive within the confines of the graveyard and in wider world beyond. (ages 10 and up) -–Heidi Broadhead

Nobody Owens, known to his friends as Bod, is a normal boy.

He would be completely normal if he didn't live in a sprawling graveyard, being raised and educated by ghosts, with a solitary guardian who belongs to neither the world of the living nor of the dead.

There are dangers and adventures in the graveyard for a boy-an ancient Indigo Man beneath the hill, a gateway to a desert leading to an abandoned city of ghouls, the strange and terrible menace of the Sleer.

But if Bod leaves the graveyard, then he will come under attack from the man Jack—who has already killed Bod's family. . . .

Beloved master storyteller Neil Gaiman returns with a luminous new novel for the audience that embraced his New York Times bestselling modern classic Coraline. Magical, terrifying, and filled with breathtaking adventures, the graveyard book is sure to enthrall readers of all ages.