Items related to Out of Oz: The Final Volume in the Wicked Years (Wicked...

Maguire, Gregory Out of Oz: The Final Volume in the Wicked Years (Wicked Years, 4) 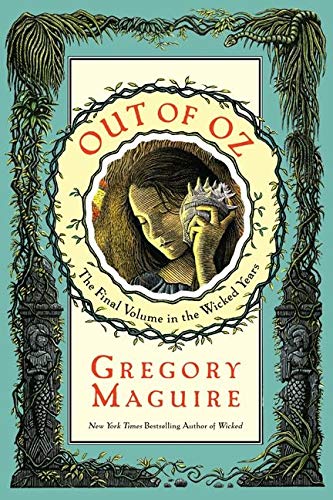 Hailed as “bewitching,” “remarkable,” “extraordinary,” “engrossing,” “amazing,” and “delicious,” Gregory Maguire’s Wicked Years series—a sophisticated fantasy cycle inspired by the classic children’s novel The Wizard of Oz—became national bestsellers and the basis for a hit Tony-winning Broadway musical. Now, Maguire returns with the final installment in his transformative work, a thrilling and compulsively readable saga in which the fate of Oz is decided at last. . . .

Once peaceful and prosperous, the spectacular Land of Oz is knotted with social unrest: The Emerald City is mounting an invasion of Munchkinland, Glinda is under house arrest, and the Cowardly Lion is on the run from the law. And look who’s knocking at the door. It’s none other than Dorothy. Yes. That Dorothy.

Yet amidst all this chaos, Elphaba’s granddaughter, the tiny green baby born at the close of Son of a Witch, has come of age. Now it is up to Rain to take up her broom—and her legacy—in an Oz wracked by war.

The stirring, long-awaited conclusion to the bestselling series begun with Wicked, Out of Oz is a magical journey rife with revelations and reversals, reprisals and surprises—the hallmarks of the unique imagination of Gregory Maguire.


Depending on how you count the years, I am about at my 25th anniversary of the original inspiration for Wicked. I was on a walk on a country road in Massachusetts, thinking myopically and somewhat self-regardingly about various offenses that I felt had been perpetrated against me. I was wondering about how apparently trustworthy people could turn dangerous, or if they really had been dangerous all along, merely well-disguised, even from themselves? A standard issue college dorm question, I suppose, but the matter seemed urgent to me that year. I moved from the slightly sore subject of my personal life into the realm of imagination to keep the question alive without it hurting so much, and almost immediately I thought of the Wicked Witch of the West--admittedly, more Margaret Hamilton than L. Frank Baum--and I wondered: Was she always terrible?

The momentary crisis of that year, combined with attention to acts of evil and distress in our larger world a few years later, brought me into Oz and the world of Wicked. Still, even eight years later when Wicked was first published, I hadn't expected that the story would remain a presence in the world. I had an imagination big enough to see into every cranny of Oz, but not big enough to imagine that anyone else might get interested, and stay interested.

After the story of Elphaba hit the bookstores, the national bestseller lists, the book clubs, and then the Broadway stage, the increasing attention to the story prompted me to go back and follow up the clues I had liberally sprinkled in the first book. Son of a Witch posited that Elphaba and Fiyero had an illegitimate boy, and considered the troubles he would have first growing up with the Witch as a negligent mother and then, even worse, with his negligent mother gone from his life. A Lion Among Men followed up with the Cowardly Lion's tale. Why the Lion and not the Tin Woodman or the Scarecrow, readers ask me. For a number of reasons, but chief among them is that the Lion is an Animal, and Elphaba's concern for the flight of talking Animals makes his life story more urgent to the themes of the Wicked Years sequence.

So finally we come to Out of Oz, the fourth and I believe final book in the series. I feel both elated and elegiac to be bringing it to readers. I get to revisit characters I love--Glinda, under house arrest; the Cowardly Lion, on the run from the law; Liir, the Witch's boy; and a little girl growing up in the shadows who may be pivotal to the resolution of military and social struggle in Oz.

Oh, and yes--Dorothy too. Dorothy Gale. That Dorothy. She comes on for something more than a curtain call. Face it: you always knew Dorothy was too strong a force to stay buckled down on the Kansas prairie, didn't you? No earthly gravity can hold that girl in one place for long: she defies gravity, too, only without the broomstick.

Come for a visit and stay a while. (It's over five hundred pages!) Out of Oz is, I hope, out of this world.

Gregory Maguire is the New York Times bestselling author of Confessions of an Ugly Stepsister; Lost; Mirror Mirror; and the Wicked Years, a series that includes Wicked, Son of a Witch, A Lion Among Men, and Out of Oz. Now a beloved classic, Wicked is the basis for a blockbuster Tony Award–winning Broadway musical. Maguire has lectured on art, literature, and culture both at home and abroad. He lives with his family near Boston, Massachusetts.

Book Description Condition: New. This is a brand new book! Fast Shipping - Safe and Secure Mailer - Our goal is to deliver a better item than what you are hoping for! If not we will make it right!. Seller Inventory # 1XGGTE0005Y1_ns

Out of Oz: The Final Volume in the Wicked Years

Out Of Oz The Final Volume in the Wicked Years

Out of Oz: The Final Volume in the Wicked Years: 4

Out of Oz: The Final Volume in the Wicked Years: 4