Road Angels: Searching For Home On America's Coast of Dreams 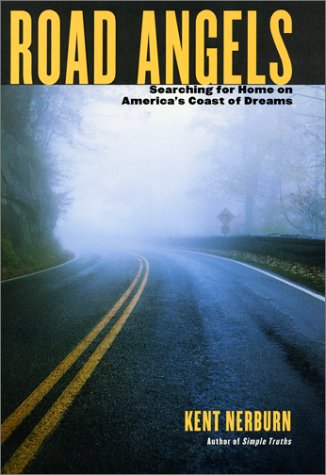 A midwestern skeptic embarks on a witty, compelling journey from the frozen plains of Minnesota to California in search of answers to life's most vexing questions. 25,000 first printing.

Kent Nerburn received his Ph.D. in religion and art from Graduate Theological Union in conjunction with the University of California at Berkeley. Formerly a sculptor of religious art, he now devotes himself to crafting books. He is the author of Simple Truths, Letters to My Son, and Small Graces, as well as several books on Native American wisdom.

Bestselling author and native Minnesotan Nerburn (Simple Truths) navigates the West Coast from Washington to California. "[N]o divorce, no loss of job, no dramatic crisis of faith and self-confidence" led Nerburn away from his home in beautiful, isolated northern Minnesota, and his wife and his 10-year-old son, only a sense that the West Coast is his old lover: "Until I put her out of my mind... I'll never be at peace with this cold outpost that we now call home." Revisiting his young-adult haunts of 20 years ago, he hunts "street-level experience the ordinary people, the casual encounters, the ad hoc turns and serendipitous decisions." In various encounters a Native American, a student hitchhiker, a log-truck driver Nerburn captures the vocal and narrative styles of people who otherwise seem like caricatures (noble Native, ditzy student, gruff worker). Though he wants to explore "the myth of the West and the road" via these voices, for the book's first two-thirds he ruminates interminably on the misery of the trip. Cogent insights into 1960s counterculture's smalltown legacies ("Their mendicant lifestyle has been reduced to a pauper's huddling inside of half-finished huts") are overwhelmed by facile observations ("cities... feel like places where will and ambition matter more than sensitivity and compassion"). Nerburn's ingenuousness at the West's many changes including one improbable moment when he doesn't understand the ordering box in a fast-food drive-through lane smacks of pretense when one knows that he maintains his own Web site (www.kentnerburn.com). In the last third, he forsakes his midlife crisis for a tough, tight account of a day in wealthy, suburban Mill Valley and politicized Berkeley and Oakland's mean streets, finally achieving the immediacy and palpability he seeks. 6-city West Coast author tour; 15-city NPR tour. (June)
Copyright 2001 Reed Business Information, Inc.

1. Road Angels: Searching For Home On America's Coast of Dreams

2. Road Angels: Searching For Home On America's Coast of Dreams

3. Road Angels: Searching For Home On America's Coast of Dreams

4. Road Angels: Searching For Home On America's Coast of Dreams

7. Road Angels: Searching For Home On America's Coast of Dreams