Items related to Up in Honey's Room: A Novel

Leonard, Elmore Up in Honey's Room: A Novel

Up in Honey's Room: A Novel 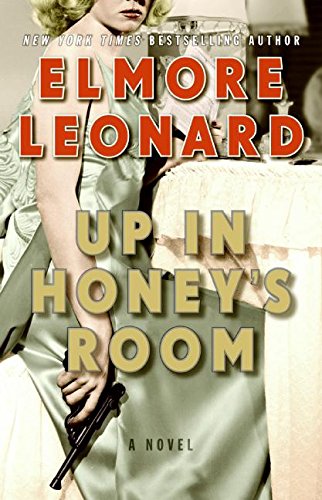 The odd thing about Walter Schoen, German born but now running a butcher shop in Detroit, he's a dead ringer for Heinrich Himmler, head of the SS and the Gestapo. They even share the same birthday.

Honey Deal, Walter's American wife, doesn't know that Walter is a member of a spy ring that sends U.S. war production data to Germany and gives shelter to escaped German prisoners of war. But she's tired of telling him jokes he doesn't understand—it's time to get a divorce.

Along comes Carl Webster, the hot kid of the Marshals Service. He's looking for Jurgen Schrenk, a former Afrika Korps officer who escaped from a POW camp in Oklahoma. Carl's pretty sure Walter's involved with keeping Schrenk hidden, so Carl gets to know Honey, hoping she'll take him to Walter. Carl then meets Vera Mezwa, the nifty Ukrainian head of the spy ring who's better looking than Mata Hari, and her tricky lover Bohdan with the Buster Brown haircut and a sly way of killing.

Honey's a free spirit; she likes the hot kid marshal and doesn't much care that he's married. But all Carl wants is to get Jurgen Schrenk without getting shot. And then there's Otto—the Waffen-SS major who runs away with a nice Jewish girl. It's Elmore Leonard's world—gritty, funny, and full of surprises.

Elmore Leonard wrote more than forty books during his long career, including the bestsellers Raylan, Tishomingo Blues, Be Cool, Get Shorty, and Rum Punch, as well as the acclaimed collection When the Women Come Out to Dance, which was a New York Times Notable Book. Many of his books have been made into movies, including Get Shorty and Out of Sight. The short story "Fire in the Hole," and three books, including Raylan, were the basis for the FX hit show Justified. Leonard received the Lifetime Achievement Award from PEN USA and the Grand Master Award from the Mystery Writers of America. He died in 2013.

Arliss Howard demonstrated his mastery of rural American voices in Elmore Leonard's THE HOT KID, in which he first breathed life into the character of Deputy U.S. Marshal Carl Webster. Now, in UP IN HONEY'S ROOM--a sequel of sorts--Howard expands on that performance as he voices Nazi POWs, a Ukrainian femme fatale, a cross-dressing hit man, and one of the most carnal Elmore Leonard characters, the lovely Honey Deal. Though the plot sounds like pulp fiction--a lawman tracks POWs and spy rings in 1945 Detroit--the novel is much more. It's a strange, often absurd history lesson that ultimately hinges on whether Carl will honor his marriage vows to his machine-gun-toting spouse . . . or succumb to Honey's charms. R.W.S. Winner of AudioFile Earphones Award © AudioFile 2007, Portland, Maine-- Copyright © AudioFile, Portland, Maine

5. Up in Honey's Room: A Novel Leonard, Elmore