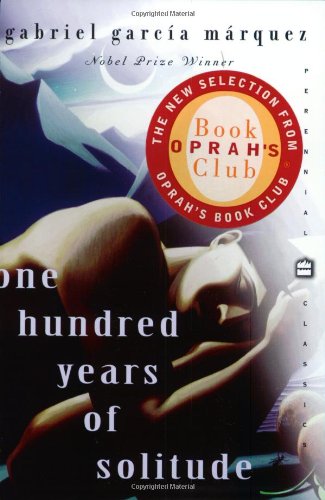 "Many years later, as he faced the firing squad, Colonel Aureliano BuendĒa was to remember that distant afternoon when his father took him to discover ice."

It is typical of Gabriel GarcĒa Mßrquez that it will be many pages before his narrative circles back to the ice, and many chapters before the hero of One Hundred Years of Solitude, BuendĒa, stands before the firing squad. In between, he recounts such wonders as an entire town struck with insomnia, a woman who ascends to heaven while hanging laundry, and a suicide that defies the laws of physics:

A trickle of blood came out under the door, crossed the living room, went out into the street, continued on in a straight line across the uneven terraces, went down steps and climbed over curbs, passed along the Street of the Turks, turned a corner to the right and another to the left, made a right angle at the BuendĒa house, went in under the closed door, crossed through the parlor, hugging the walls so as not to stain the rugs, went on to the other living room, made a wide curve to avoid the dining-room table, went along the porch with the begonias, and passed without being seen under Amaranta's chair as she gave an arithmetic lesson to Aureliano Josķ, and went through the pantry and came out in the kitchen, where ┌rsula was getting ready to crack thirty-six eggs to make bread.
"Holy Mother of God!" ┌rsula shouted.

The story follows 100 years in the life of Macondo, a village founded by Josķ Arcadio BuendĒa and occupied by descendants all sporting variations on their progenitor's name: his sons, Josķ Arcadio and Aureliano, and grandsons, Aureliano Josķ, Aureliano Segundo, and Josķ Arcadio Segundo. Then there are the women--the two ┌rsulas, a handful of Remedios, Fernanda, and Pilar--who struggle to remain grounded even as their menfolk build castles in the air. If it is possible for a novel to be highly comic and deeply tragic at the same time, then One Hundred Years of Solitude does the trick. Civil war rages throughout, hearts break, dreams shatter, and lives are lost, yet the effect is literary pentimento, with sorrow's outlines bleeding through the vibrant colors of GarcĒa Mßrquez's magical realism. Consider, for example, the ghost of Prudencio Aguilar, whom Josķ Arcadio BuendĒa has killed in a fight. So lonely is the man's shade that it haunts BuendĒa's house, searching anxiously for water with which to clean its wound. BuendĒa's wife, ┌rsula, is so moved that "the next time she saw the dead man uncovering the pots on the stove she understood what he was looking for, and from then on she placed water jugs all about the house."

With One Hundred Years of Solitude Gabriel GarcĒa Mßrquez introduced Latin American literature to a world-wide readership. Translated into more than two dozen languages, his brilliant novel of love and loss in Macondo stands at the apex of 20th-century literature. --Alix Wilber

In 1967, One Hundred Years of Solitude launched Gabriel GarcĒa Mßrquez to international fame and cemented his reputation as a literary legend. A central figure in the Latin Boom, GarcĒa Mßrquez was the most celebrated practitioner of the literary style that has become known as magic realism, and in 1982, he received the most prestigious literary award, the Nobel Prize in Literature.

Chilean poet and Nobel Laureate Pablo Neruda called One Hundred Years of Solitude "the greatest revelation in the Spanish language since Don Quixote of Cervantes." In the New York Times, legendary critic John Leonard proclaimed, "With a single bound, Gabriel GarcĒa Mßrquez leaps onto the stage with G³nter Grass and Vladimir Nabokov." And writer William Kennedy has hailed One Hundred Years of Solitude as "the first piece of literature since the Book of Genesis that should be required reading for the entire human race. Mr. GarcĒa Mßrquez has done nothing less than to create in the reader a sense of all that is profound, meaningful, and meaningless in life."

Over four decades after its publication, One Hundred Years of Solitude remains one of the most beloved and venerated books in world literature. A rich and brilliant chronicle of life and death, it tells the story of the mythical town of Macondo through the lives of seven generations of the doomed BuendĒa family. In the noble, ridiculous, beautiful, and tawdry story of the BuendĒas, one sees all of humanity, just as in the history, myths, growth, and decay of Macondo one sees all of Latin America.

One Hundred Years of Solitude

ONE HUNDRED YEARS OF SOLITUDE (O

One Hundred Years of Solitude

Shipping: US$ 30.51
From United Kingdom to U.S.A.
Destination, rates & speeds