Items related to Edge of Battle: A Novel

Edge of Battle: A Novel 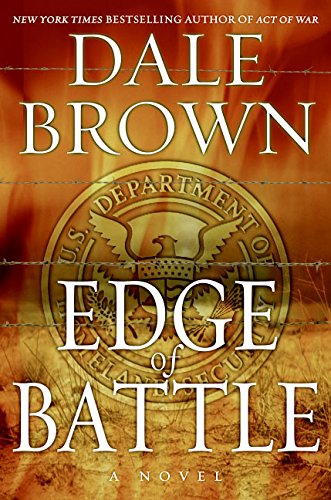 The War on Terror . . . with a little more firepower

Violence and tensions along the U.S.-Mexican border have never been higher, sparked by battles between rival drug lords and an increased flow of illegal migrants. To combat the threat, the United States has executed Operation Rampart: a controversial test base in Southern California run by Major Richter and TALON, his high-tech special operations unit.

Their success is threatened by a drug kingpin and migrant smuggler named Ernesto Fuerza. In the guise of Mexican nationalist "Commander Veracruz," he causes a storm of controversy on both sides of the border, calling for a revolution to take back the northernmost "Mexican states"—the southwestern United States. His real intention is to make it easier to import illegal drugs across the border. This sets off a storm of controversy that's being stirred to a fever pitch by a popular right-wing radio talk-show host who calls for the complete militarization of the border. Soon Richter and his force are reassigned to the FBI to investigate the murders of several Border Patrol agents—a deadly mission that will bring him face-to-face with Fuerza and set off a wave of bloodshed that threatens to become an all-out guerrilla war. Lurking behind Fuerza—and possibly calling the shots—is Richter's nemesis, former Soviet nuclear forces commander turned terror mastermind Yegor Zakharov, who is set on revenge to the very end.

In Edge of Battle, bestselling author Dale Brown stays a step ahead of world events. Don't miss this sensational ride!

The combination of illegal immigration and advanced military weapons research promises an edge-of-the-seat thriller. The story begins as illegal immigrants are killed near Operation Rampart, a test military base with a crew of Talon robots in Southern California. Michael McShane effectively manipulates pitch and tone, creates a variety of male and female characters, and delivers American and Mexican accents. But the story itself becomes lost in the author's exposition on the job losses, lack of economic opportunity, and blight on the U.S. health system caused by illegal immigration. McShane doesn't deliver the promised thriller, but neither does the author. G.D.W. © AudioFile 2007, Portland, Maine-- Copyright © AudioFile, Portland, Maine