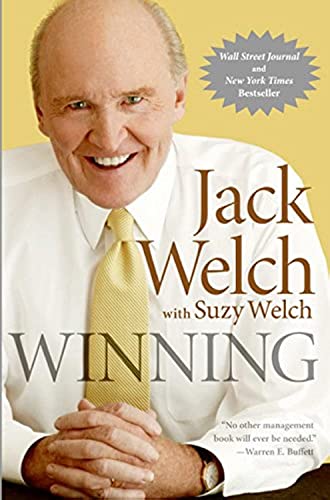 Jack Welch knows how to win. During his forty-year career at General Electric, he led the company to year-after-year success around the globe, in multiple markets, against brutal competition. His honest, be-the-best style of management became the gold standard in business, with his relentless focus on people, teamwork, and profits.

Since Welch retired in 2001 as chairman and chief executive officer of GE, he has traveled the world, speaking to more than 250,000 people and answering their questions on dozens of wide-ranging topics.

Inspired by his audiences and their hunger for straightforward guidance, Welch has written both a philosophical and pragmatic book, which is destined to become the bible of business for generations to come. It clearly lays out the answers to the most difficult questions people face both on and off the job.

Welch's objective is to speak to people at every level of an organization, in companies large and small. His audience is everyone from line workers to MBAs, from project managers to senior executives. His goal is to help everyone who has a passion for success.

Welch begins Winning with an introductory section called "Underneath It All," which describes his business philosophy. He explores the importance of values, candor, differentiation, and voice and dignity for all.

The core of Winning is devoted to the real "stuff" of work. This main part of the book is split into three sections. The first looks inside the company, from leadership to picking winners to making change happen. The second section looks outside, at the competition, with chapters on strategy, mergers, and Six Sigma, to name just three. The next section of the book is about managing your career—from finding the right job to achieving work-life balance.

Welch's optimistic, no excuses, get-it-done mind-set is riveting. Packed with personal anecdotes and written in Jack's distinctive no b.s. voice, Winning offers deep insights, original thinking, and solutions to nuts-and-bolts problems that will change the way people think about work.

If you judge books by their covers, Jack Welch's Winning certainly grabs your attention. Testimonials on the back come from none other than Warren Buffett, Bill Gates, Rudy Giuliani, and Tom Brokaw, and other praise comes from Fortune, Business Week, and Financial Times. As the legendary retired CEO of General Electric, Welch has won many friends and admirers in high places. In this latest book, he strives to show why. Winning describes the management wisdom that Welch built up through four and a half decades of work at GE, as he transformed the industrial giant from a sleepy "Old Economy" company with a market capitalization of $4 billion to a dynamic new one worth nearly half a trillion dollars.

Welch's first book, Jack: Straight from the Gut, was structured more as a conventional CEO memoir, with stories of early career adventures, deals won and lost, boardroom encounters, and Welch's process and philosophy that helped propel his success as a manager. In Winning, Welch focuses on his actual management techniques. He starts with an overview of cultural values such as candor, differentiation among employees, and inclusion of all voices in decision-making. In the second section he covers issues around one's own company or organization: the importance of hiring, firing, the people management in between, and a few other juicy topics like crisis management. From there, Welch moves into a discussion of competition, and the external factors that can influence a company's success: strategy, budgeting, and mergers and acquisitions. Welch takes a more personal turn later with a focus on individual career issues--how to find the right job, get promoted, and deal with a bad boss--and then a final section on what he calls "Tying Up Loose Ends." Those interested in the human side of great leaders will find this last section especially appealing. In it, Welch answers the most interesting questions that he's received in the last several years while traveling the globe addressing audiences of executives and business-school students. Perhaps the funniest question in this section comes at the very end, posed originally by a businessman in Frankfurt, who queried Welch on whether he thought he'd go to heaven (we won't give away the ending).

While different from the steadier stream of war stories and real-life examples of Welch's first book, Winning is a very worthwhile addition to any management bookshelf. It's not often that a CEO described as the century's best retires, and then chooses to expound on such a wide range of management topics. Also, aside from the commentary on always-relevant issues like employee performance reviews and quality control, Welch suffuses this book with his pugnacious spirit. The Massachusetts native who fought his way to the top of the world's most valuable company was in many ways the embodiment of "Winning," and this spirit alone will provide readers an enjoyable read. --Peter Han

Jack Welch is the Executive Chairman of the Jack Welch Management Institute, an online MBA school with more than 1,000 students. Prior to this, for 20 years, he was Chairman and CEO of General Electric Company, which was named the world's most valuable corporation and was consistently voted the most admired company in the world by Fortune magazine. Welch is active in private equity and consulting, working with dozens of businesses in a wide variety of industries. Along with speaking to upwards of a million people around the world, CNBC named Jack Welch one of the Top 10 "Rebels, Icons and Leaders" of the past 25 years.